During the past years the production of goods and services in a country becomes impossible and economic inefficient.

The states are determined world circuit of material and spiritual values. However this participation must be regulated by certain legal rules, therefore the ITL was conceived to regulate the relations which are established within the process of international exchange of materials, of spiritual values. These relations may be established between states and merchants, natural or legal persons or finally between merchants belonging to different states.

We may consider that the ITL represents all the legal rules that regulate the international trade relations between states and merchants form other countries or finally between merchants belonging to different states.

ITL is a branch of law.

ITL is a specific branch of law because it has its own object under settlement (the juridical relations of international trade) and its own method of regulating them.

The juridical relations of international trade

Has 2 features which makes the distinction between it and other juridical relations belonging to different branches of law. This 2 features are as follows:

- defined by each system of law

- however, there are 2 approaches when defining this feature in the national systems of law as follows

I. the subjective approach:

• found mainly in the German systems if law

• according to this approach all the juridical relations concluded between merchants, commercial companies or individuals are considered commercial relations 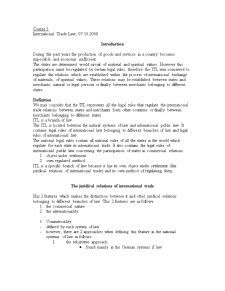 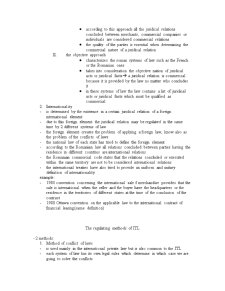 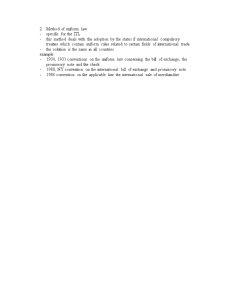 These are the specific sources of each system of law which contain rules that regulate the IT of each state and the participation of each state in...

- most important category of merchants that participate in IT relations - the types of merchants legal persons are provided by the national...

- They are meant to allow the concentration of capital, because most national legislations include legal provisions. - There are 3 categories of...