These are the specific sources of each system of law which contain rules that regulate the IT of each state and the participation of each state in the activity of international economic, technical and scientific cooperation.

In order to determine the specific sources of each system of law we have to take into consideration the fact that each state has its own system and sources of law which are different from ones of other states.

Generally the systems of law of the states may be classified in 3 categories as follows:

1. system of law of Roman tradition (continental systems of law)

– found mainly in Europe and Asia

– may be divided in 2 categories:

a. systems that provide the unity of private law

b. systems that provide the duality of private law

- the main source is the written law

- in the ones that provide the unity of private law the main national source of ITL is the civil law, namely the civil code and other special codes that contain legal rules to the IT relations

- in the ones that provide the duality, the main national source is the commercial law: the commercial code and other special rules that regulate the IT relations

- they are also applied to the juridical relations of IT

The organization of legal rules into juridical institutions in order to facilitate their use.

Juridical institutions contain all rules that regulate a certain category of social relations.

Example: the juridical institutions of the ownership right, of the contract

- from the ITL point of view the codification supposes the activities of harmonization, standardization, unification of legal rules and creation of uniform law.

- the result of the work of international associations of merchants

- it means the creation of unitary, harmonized rules that may be applied in IT

example: the International Trade Chamber from Paris had adopted and published a harmonized interpretation of international commercial practices

- this documents are INCOTERMS international rules for interpretation of commercial terms 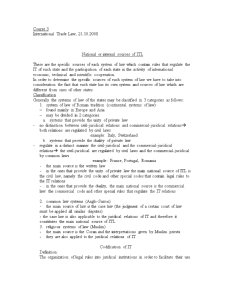 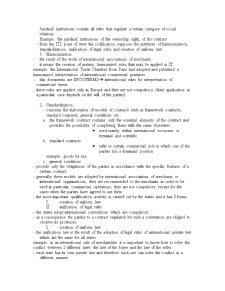 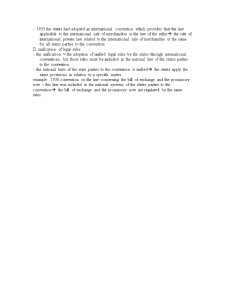