The discernment is a mental ability to understand the nature and the effect of a contract (defined from a legal point of view). To discern = to see clearly.

I. The period of absence (it doesn’t have any concrete capacity)

The persons are subjects of incapacity, they can participate to juridical life, but not by themselves, they must be represented by a legal administrator (parent). The idea is the persons in this period of time cannot validly conclude contracts. But there are some which are recognized as valid: they can go shopping.

The persons may conclude some contracts by themselves; they need the assistance of a parent or a guardian in order to conclude contracts. There are some contracts that may not be concluded by persons in this category.

1. contracts that may be concluded by persons after the age of 14 by themselves:

- employment contract may be concluded after the age of 16.

- The contracts concluded in order to manage a real estate, which belongs to the person between 14-18.

2. contracts which may be concluded only with the assistance of a parent/guardian:

- selling contracts (the contract needs to be signed both by the parent and by the person.

- Between 15-16 the person needs the consent of his parents to get a job. 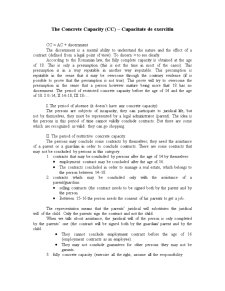 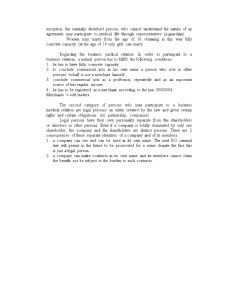