What is conflict and conflict management-

Conflict may be defined as a struggle or contest between people with opposing needs, ideas, beliefs, values, or goals. Conflict on teams is inevitable; however, the results of conflict are not predetermined.

Morton Deutsch defines conflict as “a situation in which incompatible activities occur. An action which is incompatible with another action prevents, obstructs, interferes with, injures, or in some way makes it less likely or less effective.”1

Conflict might escalate and lead to nonproductive results, or conflict can be beneficially resolved and lead to quality final products. Therefore, learning to manage conflict is integral to a high-performance team. Although very few people go looking for conflict, more often than not, conflict results because of miscommunication between people with regard to their needs, ideas, beliefs, goals, or values.

Jeffrey Pfeffer defines conflict as “a desire on the part of both contestants to obtain what is available only to one, or only in part.”2 Obviously there are a large number of specialists who studied the problem of conflict and conflict management, but lately there appeared a new theory according to which conflict can be beneficial for an organization or enterprise, and the new studies focus on the possible equilibrium between positive and negative characteristics of conflict.

Conflict is defined as an incompatibility of goals or values between two or more parties in a relationship, combined with attempts to control each other and antagonistic feelings toward each other (Fisher, 1990).

The incompatibility or difference may exist in reality or may only be perceived by the parties involved. Nonetheless, the opposing actions and the hostile emotions are very real hallmarks of human conflict.

Conflict has the potential for either a great deal of destruction or much creativity and positive social change (Kriesberg, 1998). Therefore, it is essential to understand the basic processes of conflict so that we can work to maximize productive outcomes and minimize destructive ones.

Conflict between people in an organization appears as a result of an inner competition between them, thing which sometimes is good because it can lead to positive company results. If people compete against each other they may come up with brilliant ideas or solutions, which might help a company, even solve financial problems, etc. At the same time the negative outcome of the conflict between people is the result of a scarcity of resources, lack of understanding between individuals, inability to accept organizational hierarchy.

Jeffrey Gandz, in his study Resolving Conflicts: A Guide for the Industrial Relations Manager supports the idea that there are three types of conflict in human and industrial relations management:

1. Pseudo-conflict – when one party does not understand the actions of reasons of the other. Example: when a person is relocated in another department in the organization he may perceive the action as a downsizing.

3. Conflict of interests – when the parties involved have totally different objectives in life.3

D. J. Harris produces a scheme which focuses on the most frequently observed types of conflict:

1. Problems based on individual differences – which refer to conflicts between people with opposing points of view, unable to reach a consensus.

2. Problems resulting from perceptual differences – differences which are directly connected to human behavior.

3. Problems deriving from differences inside an organization – which appear as a result of a lack of resources.4 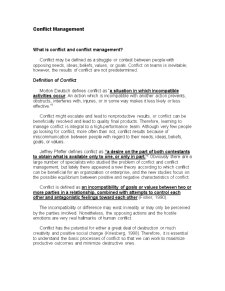 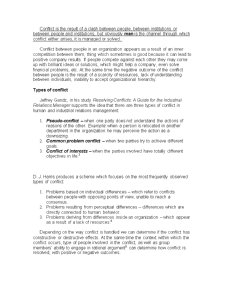 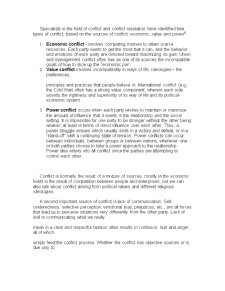 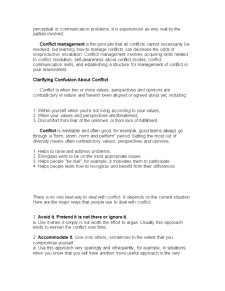 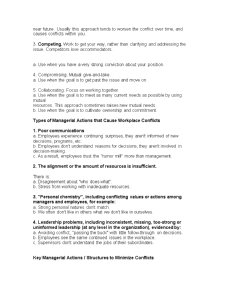 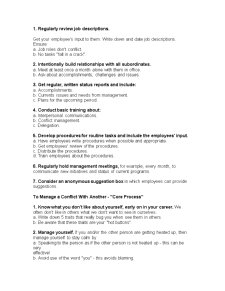 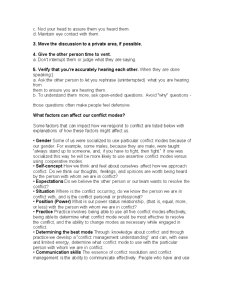 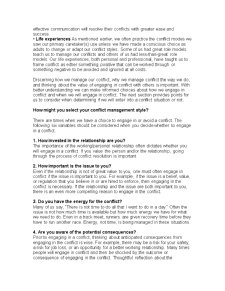 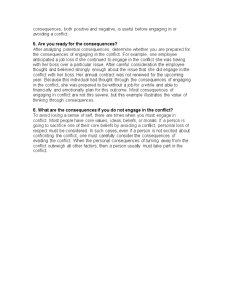 SECTION A. INTRODUCTION 1. Match the verbs in the left column with their corresponding synonyms in the right column: to deal with to explain to...

Proiect
Migration-Relocating the workforce from culture shock to acculturation

The Difference between Blending and Adapting Many people believe that these two phrases are interchangeable, but they are not. Blending in is...