VERBS WE COMMONLY USE IN THE PASSIVE

1. verbs without an agent – we use some verbs more often in the passive than in the active because the agent is either unknown or obvious, or not important to what we want to say:

I was born in Italy.

My neighbour’s been arrested!

She was fined 100$ for driving without insurance.

Stockholm has been dubbed the Venice of the North.

We’ve been conditioned into accepting TV as essential.

The athlete was acclaimed as a national hero.

The old man has been indicted as a war criminal.

I don’t think any of these remarks could be construed as positive.

3. no preposition – some common passive verbs (e.g.: be called, be named, be deemed, be dubbed) are not commonly followed by a preposition:

All his efforts were deemed a complete waste of public resources.

I’ve been called many things in my life, but never “stupid”.

4. phrasal verbs – we also commonly use particular verbs in the passive:

This coat was handed down to me by my elder brother.

I was so caught up in my book that I failed to realise the time.

The get-out clause was written into their contract.

1. The condemned man was reprieved a. for complaining to the referee.

2. I was completely mesmerized b. by experienced machine operators.

3. The old man was paralysed c. as aggressive.

4. Both players were penalized d. at the last moment.

5. I’ve been swamped e. for next Friday

6. The meeting has been scheduled f. by his performance.

7. John was somewhat disconcerted g. by his performance.

8. His behaviour was in danger

of being construed h. with offers of help.

9. She was hospitalized i. down one side after the stroke.

10. The factory is staffed j. for three months after the accident.

1. phrasal verbs can be either transitive or intransitive:

Would you turn off the radio, please.

When you get to the next crossroads, turn off.

2. a preposition can sometimes follow a verb which is not a phrasal verb:

Who lives across the road?

3. some prepositions commonly follow certain verbs because of meaning and collocation:

This broken plate will have to be paid for.

What are you looking at?

B. Position of object

1. when a phrasal verb is transitive, we can place a noun object before or after the verb:

2. when an object is pronoun, it is always placed before the adverb:

Please turn it off.

3. with a verb + preposition, the preposition is placed before its object. We can’t put the object between a verb and a preposition:

I came into it when my father died. 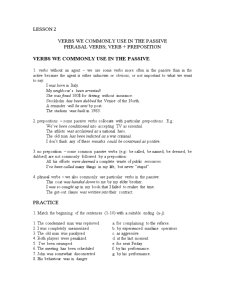 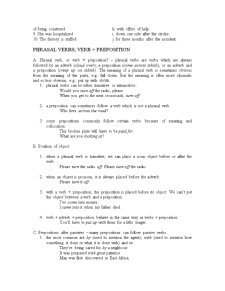 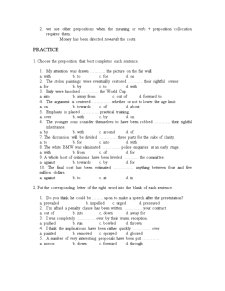 COMPUTERS IN OUR LIVES Since his first appearance on the earth, man has gathered information and has attempted to pass useful ideas to other...

Referat
The Impact of Computers

Computers are commonly used items in many areas. It is an important thing to people, especially the people who run organizations, industry, etc. ....

SECTION A. INTRODUCTION 1. Match the verbs in the left column with their corresponding synonyms in the right column: to deal with to explain to...

EXPRESSING PURPOSE AND EFFECT Apart from linking clauses, we can express purpose and result in other ways. A. Purpose and intention – we can use...

DIFFERENCES AND SIMILARITIES 1. Collocation – we can use a number of adjective / noun or adverb / verb collocations to say how different or...

SINGULAR, PLURAL, UNCOUNTABLE: COMMON PHRASES A. Countable and uncountable – in several common phrases nouns that are commonly countable are used...

COMMUNICATING QUOTING, REPORTING AND INTERPRETING A. Referring directly to other people’s words – we can use a number of phrases or structures to...