This final study session is intended to complete your knowledge about the evolution of the English language along the last half a millennium. This is the longest stage in the economics of the language history and it has witnessed inventions and innovations, historical, political, military and cultural events of paramount importance in the progress of humankind which inevitably have left their imprint on the English language.

By the end of this study you will be conversant with:

- The factors which further influenced the progress of the English language;

- Attitudes towards language which stood for a matter of national interest;

- Changes in the vocabulary and grammar of English before and after the 19th century;

- The cosmopolitan character of the 20th century English vocabulary.

A chronology of the Shakespearean English major historical events

1611 Authorized Version of the Bible

1755 Publication of Samuel Johnson’s Dictionary of the English Language

New factors, peculiar to this epoch influenced the development of the English language along lines which are different from those that had characterized its previous history. Among the new factors historian linguists usually include:

- the invention, adoption and the more and more extensive use of the printing press;

- the rapid spread of popular education;

- the birth and growth of social consciousness.

Not all of the factors mentioned in the foregoing exercised the same degree of influence on the evolution of the English language.

The invention of the printing press and its having been introduced into the British culture had a first impact on manuscripts: they were more and more seldom seen and almost never sold. Instead, books were brought to the reach of all the people, ceasing, thus, to constitute the expensive luxury of very few people (as they were in Chaucer’s time). The possibility to reproduce a book in one thousand or one hundred thousand copies had an overwhelming consequence upon the life of the British society: it contributed to the rapid spread of popular education. The Paston Letters say that in the later Middle Ages a large number of the middle-class population could read and write. In Shakespeare’s London almost a third or probably half of the people could at least read.

Linguistically, the importance of the printing press lay in its having constituted a means to promote a standard or uniform language thought the territory in which it was understood.

The introduction in the printing press closely intermingled with the rapid development of education. In the 17th and 18th centuries a prosperous class of the tradesmen appeared and they not only had the means to obtain an education but also had the leisure to enjoy it. The concern for education was attested by (1) the great increase in the number of schools, (2) the tremendous journalistic output of an author like Defoe and by (3) the rapid rise of the novel stand as proof for the social interest in education. As a result of popular education the printing press was able to exert its influence upon language as upon thought. 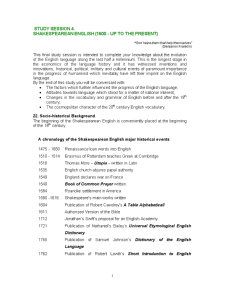 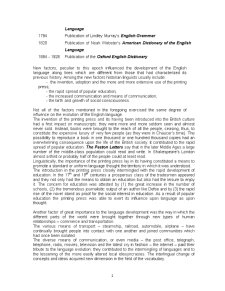 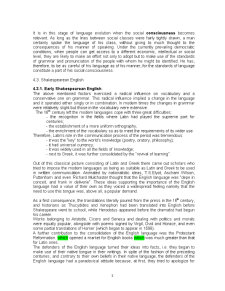 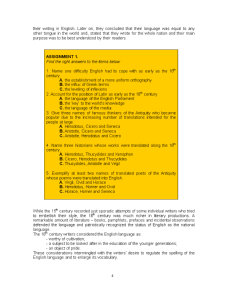 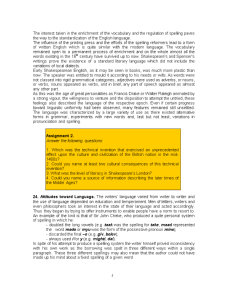 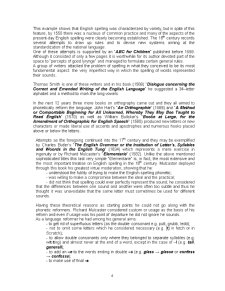 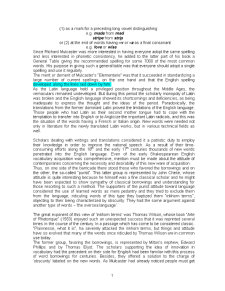 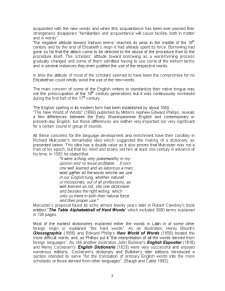 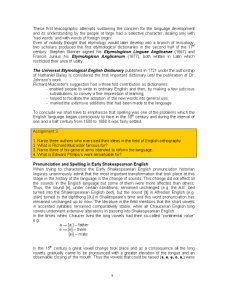 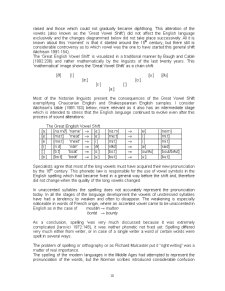 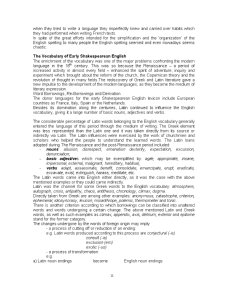 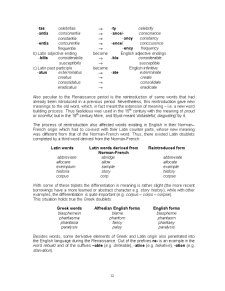 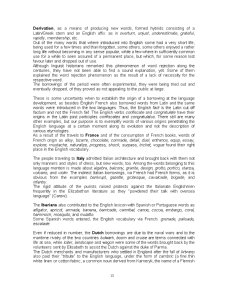 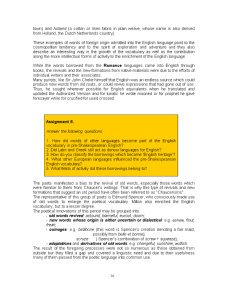 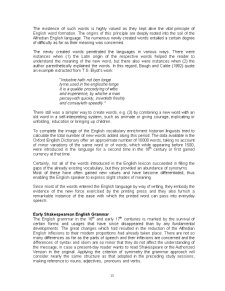 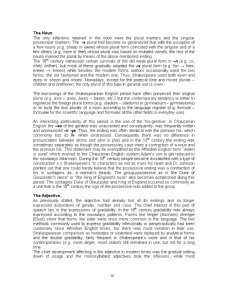 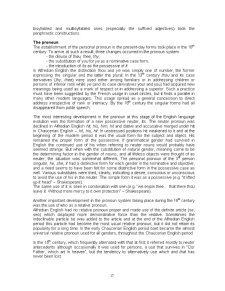 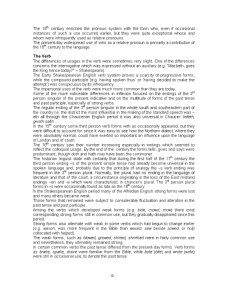 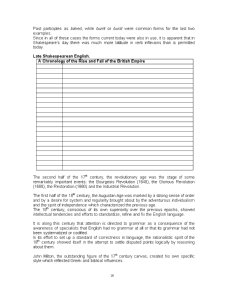 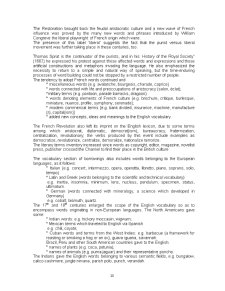 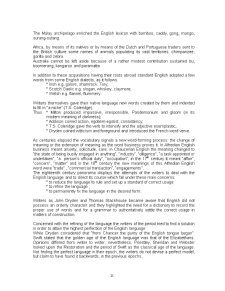 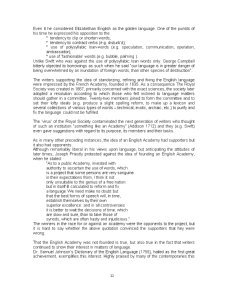 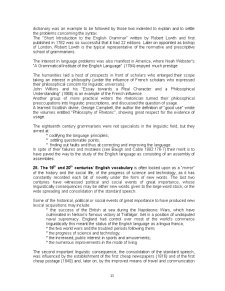 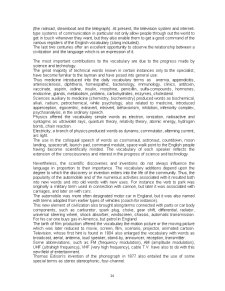 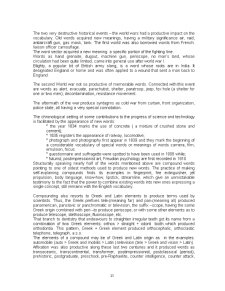 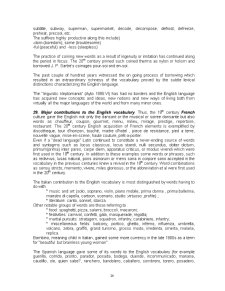 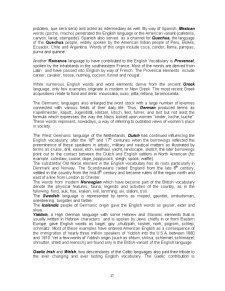 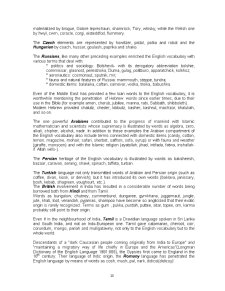 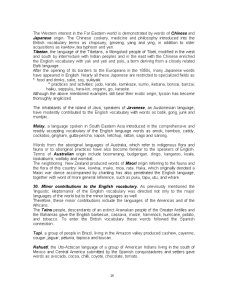 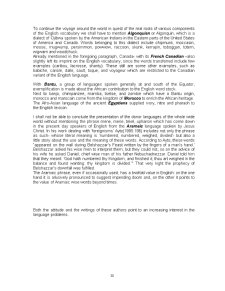 Proiect
An Approach to English Computerese

INTRODUCTION English is generally acknowledged to be the world’s most important language. It is perhaps worth glancing briefly at the basis of its...

JAMES JOYCE Now, as never before, his strange name seemed to him a prophecy. So timeless seemed the grey warm air, so fluid and impersonal his own...

There are lots of ways of describing the nature of poetry and accounting for its significance, all of them theoretical constructs designed to...

Prologue The subject of this work is mainly the sexual anxieties presented by English writers of Gothic literature, more specifically, in the...

I. INTRODUCTION The dramatic work of Shakespeare is impressive even numerically speaking: he wrote 37 plays: many - and of many kinds. In his...

Queen Elizabeth was one of the greatest monarchs in British history. During her reign the hour grew ripe and there came the greatest outburst of...

Author and Authorship Authors are individuals who, by their intellectual and immaginative powers, purposefully create from the materials of their...

Objectives I. To introduce to you the ways in which English Language vary internally II. To describe the factors that contribute to language...

When Elizabeth became Queen of England in 1558, there were no specially designed theatre buildings. Companies of actors (usually small, made of 5...