Historical development of the concept of intellectual property 4

Nature and duration of rights 8

Creation, ownership and transfer of rights 9

-Compulsory licences and licences of rights 11

The field of intellectual property law is essentially the protection from theft of virtually all the intangible products of human intellect or creativity. It protects the exclusive rights of the author, inventor or other creator in the product of his intellectual or inventive creativity. Thus it encompasses copyright, the right of the author of the written work (in the widest sense), of an artist, a musical composer, or the producer of a film, broadcast or recording. It protects the rights of performers in their performance. Patents for inventions and industrial designs come within its scope. Copyright, patents and trade marks are generally thought of as the three main areas of intellectual property: trade marks being somewhat different from the others for, notwithstanding their economic value, the intellectual creativity is sometimes (although not always) less noticeable. Confidential information deserves to be included although it is not always regarded as mainstream intellectual property.

The Copyright, Designs and Patents Act 1988 (CDPA) opens with the statement that “copyright is a property right”. The term “intellectual property” has come into vogue relatively recently to describe property rights in most of the various intangible products of the human intellect, widening the scope of another term “industrial property”. Although sometimes used to include copyright and some other similar rights, “industrial property” is more logically restricted to those rights (especially patents and trade marks) which have a close connection with industry. Intellectual property is intangible property, like shares in a company or the balance in a bank account. If an author writes a book it is not the manuscript or the book, or even the words written, which represent his copyright. His intellectual property consists of certain rights in the work (not to have it copied without his permission, for example) which make up his copyright. An inventor’s patent is not, in any real sense, the piece of paper issued by the Patent Office but the legal rights which enable him exclusively to exploit his invention, his intellectual creation.

Like other kinds of property, intellectual property can be passed on to someone else, by gift, sale or bequest. It may be transferred permanently or temporarily. In one respect, intellectual property rights are unlike rights in most other forms of property, they are (with a few exceptions) limited in time. Copyright in a written work lasts until 70 years after the death of the author, patent rights for 20 years. There are different periods for other forms of intellectual property, but eventually the right lapse and the subject matter of the rights, book, invention and so on, is said to be “in the public domain”, meaning that now anyone may copy it or make it, or otherwise exercise the rights which formerly were exclusive to the owner.

The three most important forms of intellectual property are copyright, patents and trade marks. Industrial designs and confidential information are also important, as are performer’s rights.

Copyright subsists in practically every form of original written work, whether recorded on paper, in a computer, or otherwise, also in artistic works (regardless of artistic merit), photographs, films and videos or broadcast. Computer programs and databases are also covered. Musical works (the actual composition, symphony or pop) also get copyright protection. The words of a song will have a separate copyright, and so will any recording. Closely related to copyright is performer’s right, the right of performers to control any exploitation of their performances which they have not authorized.

Industrial designs can, if they fulfill certain criteria, basically that they are non-functional, be registered and thereby acquire registered design right. Other industrial designs, particularly those where the design is not just aesthetic but fulfils a function, are protected by (unregistered) design rights. The two kinds of designs protection have, perhaps, more in common with the copyright than with patents, but offer reduced protection.

A patent is granted for an invention. The inventor or his representative must apply for the patent and there are a number of hurdles to be overcome before it is granted. The invention must be novel, involve an inventive step and be capable of “industrial application”. Many countries (but not the United Kingdom) grant protection for utility models or petty patents with less stringent requirements than are demanded for a patent.

A trade mark is rather different from other kinds of intellectual property in that there is often virtually no intellectual input involved (though, on the other hand, many trade marks are chosen after very extensive-and expensive-research). A trade mark is a mark, widely defined, which distinguishes goods or services in the course of trade. A famous trade can be a very valuable piece of property and the owner will be alert in taking legal action against anyone else who uses it without authority. A new trade mark is registered at the Trade Marks Registry, part of Patent Office, and there are fairly stringent conditions as to what can, and cannot be registered. Redress for passing off may also be available when goods or services are being passes off by a competitor as those of another business: this may well involve use of an unregistered mark.

Historical development of the concept of intellectual property in brief

The great writers of the Middle Ages knew nothing of copyright. They wrote for the greater glory of God or for personal glory, to enlighten their fellows or to teach their students, in the sure and certain knowledge (and indeed, hope) that their works would be copied and extracted and rewritten with no permission from, and often no acknowledgement of, the original authors. With the roughly contemporaneous introduction of paper and of printing through Europe the situation changed. The earliest form of “copyright” in England was the grant of royal licences to printers (who were originally also the publishers). These had the objects of protecting the monopoly of the licensed printers against those who had no licence, of raising money from licence fees for the government coffers, and of facilitating control of seditious and anti-religious publications. 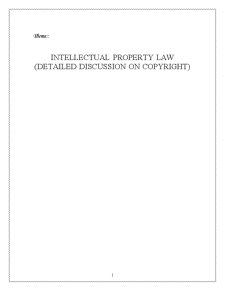 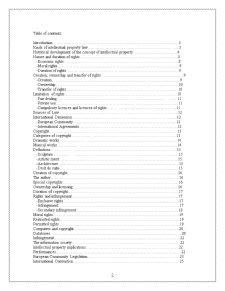 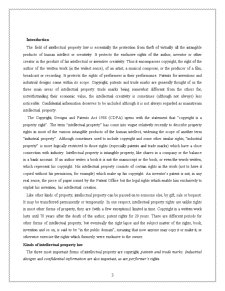 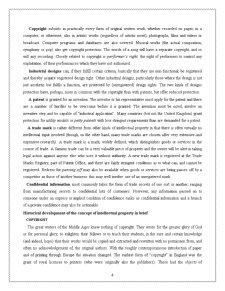 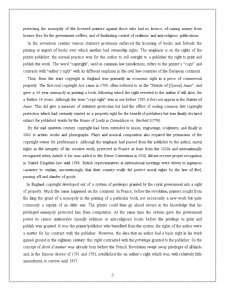 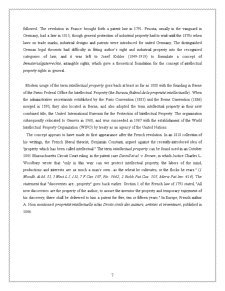 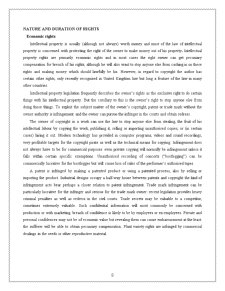 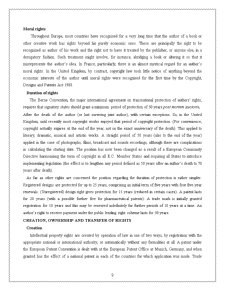 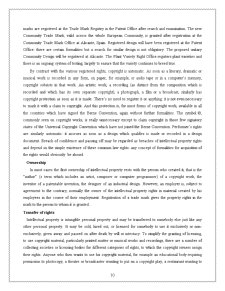 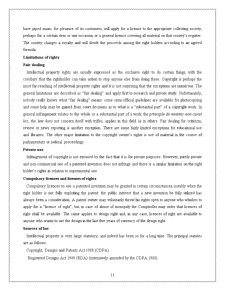 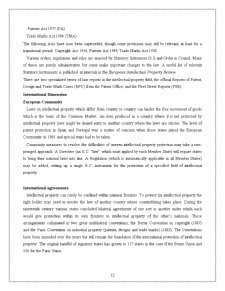 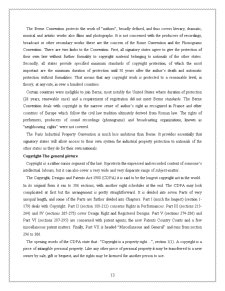 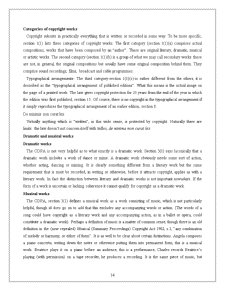 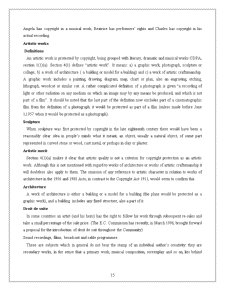 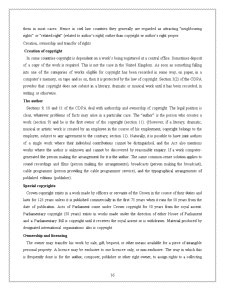 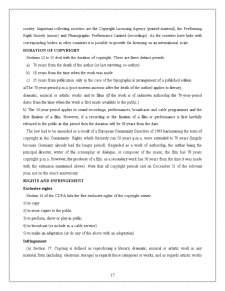 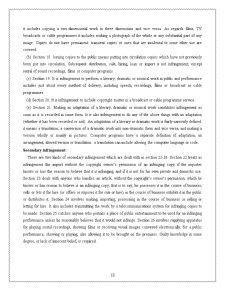 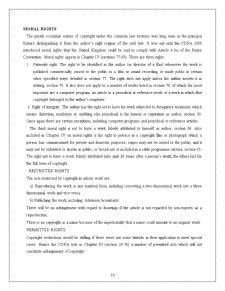 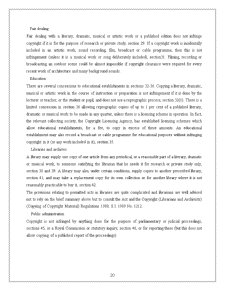 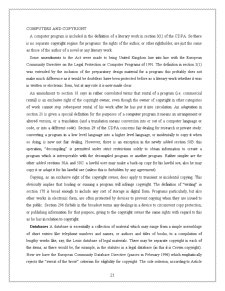 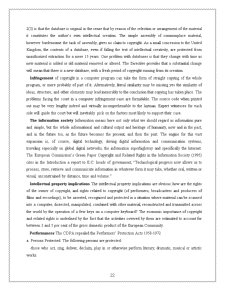 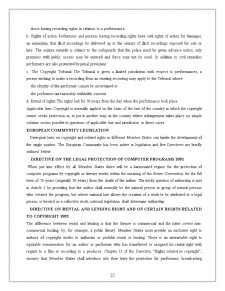 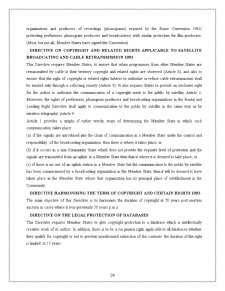 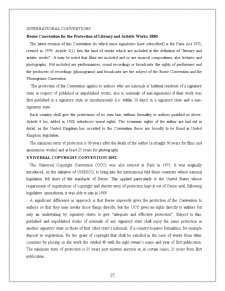 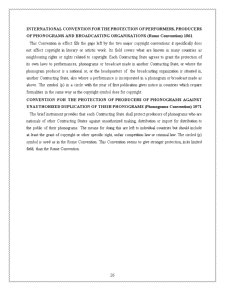 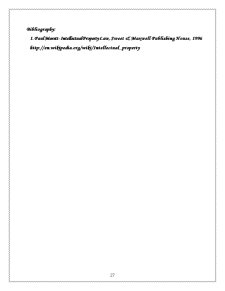 - Contract, a "promise" or an "agreement" made of a set of promises, the breach of which is recognized by the law and and for which legal remedies...