3. UAE women in education and the workplace .. 4

9. Impact of education on the entrepreneurial drive ...9

The purpose paper is to highlight for the international reader some of the unique realities which impact on female entrepreneurship in the UAE. These issues depict a scenario of a particular kind of female empowerment against a backdrop of what to Western eyes would be regarded as significant female disempowerment. What makes the UAE a compelling context for studying female entrepreneurship is that it is a country in which traditional female roles are privileged, yet it is also the country with the world's highest rate of females in third-level education. This latter fact results from government agencies prioritizing female engagement in business and public ventures in the attempt to replace some of the country's vast numbers of foreign workers with UAE citizens. Traditionally social values have curtailed female activity outside the home but recent robust government intervention has sought to mold a rapidly developing economy in which female figures can rise to public forums, while at the same time adhering to traditionally enshrined female roles. In our survey, we look at the increasingly important activity practice of networking in an environment where female movement is curtailed and family-based and single-gender networking is overriding. We also summarize the factors that motivate Emirati women to become entrepreneurs in a country which offers them more secure sources of income such as the government sector, and we illustrate the empowering role of business education for UAE women.

The United Arab Emirates (UAE) is an example of a rapid and successful development story in the region, in terms of both the infrastructure and economy of the country and also the progress of its people. The UAE’s achievement is perhaps best typified in the evolution and growing prominence of Emirati women as partners and contributors in this remarkable nation-building process. Women, who account for 49.3 percent of the national population, according to the 2005 Census, are today at the forefront of the workforce in the UAE in both the government sector as well as a growing number in the private sector. Aided by the government’s commitment to empower women and provide them with equal opportunities, the status of women within the UAE has flourished in parallel with the country’s growth since the federation was established in 1971. It is evident across the UAE that women today constitute a vital part of the nation’s workforce and actively contribute to the country’s government and economy.

In the pre-oil era, the UAE's economy revolved largely around pearl diving, fishing, and maritime trading. These were publicly regarded as strictly male-only activities. However, it was not uncommon to find women engaging in these commercial pursuits when they had no male provider to help care for their children as a result of divorce, widowhood, or husbands engaging in distant commercial maritime activities (Ebrahim et al., 2008). During this period, some local women owned many ships and others conducted trading (Abu Nasr, Khoury, & Azzam, 1985). However, such women did not negotiate directly with non-related males but required a male family member to act as intermediary. Their business activities were well tolerated although they did not gain public recognition for them (Soffan, 1980).

1. UAE women in education and the workplace

Since the establishment of the United Arab Emirates in 1971, government leaders have expended considerable effort to educate the female population and to facilitate women taking up positions of leadership in business (Nelson, 2004). Sheikh Zayed bin Sultan Al Nahyan, the UAE's founding father, is often quoted with his statement: ‘Women have the right to work everywhere’ (Women in the United Arab Emirates: A portrait of progress). One result of this initiative is that in 2000 76.8% of UAE university students were female (Al Kassadi, 2000), giving the UAE the world's highest rate of women in higher education (Fergany, 2005). Women are well represented in the local workforce making up 59% of the UAE local labor force across a variety of fields including engineering, science, healthcare, media, computer technology, law, commerce, education, government, and the oil industry (United Arab Emirates Yearbook, 2008). The number of female entrepreneurs compares well with other Gulf Arab states but lags behind other countries with similar levels of GDP per capita such as Norway, Finland, and Singapore (Erogul & McCrohan, 2008).

We know that individual, social, and environmental factors all have a direct bearing on the entrepreneurial process in terms of motivation, innovation, continuity, and expansion (Bygrave, 1994). The common challenges that female entrepreneurs face in many countries are unequal opportunities, poor credibility, lack of recognition (OECD Report, 1998), onerous family responsibilities, skills deficits, and gender segregation (Loscocco & Robinson, 1991). Poor access to financial capital and networks is also a serious primary barrier frequently faced by female entrepreneurs (Gundry, Ben-Yoseph, & Posig, 2002; Weiler & Bernasek, 2001). The UAE government is aware that it needs hard statistical evidence in order to develop effective, female friendly initiatives and ‘as part of its efforts to ensure Emirati women play a key role not only in the local arena but throughout the Gulf region, the DWE has initiated several women-centric programs with the active participation of private and public sector organizations’ (United Arab Emirates Yearbook, 2009: 239). The government report on the status of women (Women in the United Arab Emirates: A portrait of progress. Available at: http://lib.ohchr.org/HRBodies/UPR/Documents/Session3/AE/UPR_UAE_ANNEX3_E.pdf. Accessed 13 December 2008) notes that ‘Having made significant progress, the UAE does not intend to stagnate with regards to its women's empowerment policies but rather to continue and develop [ ]. The UAE intends to establish a new benchmark for gender empowerment in the region.’ 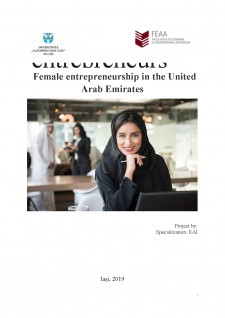 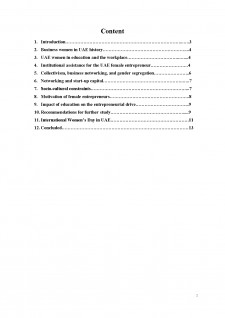 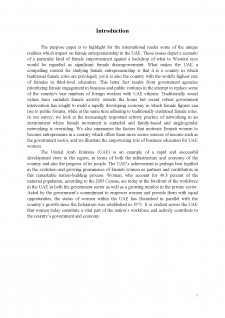 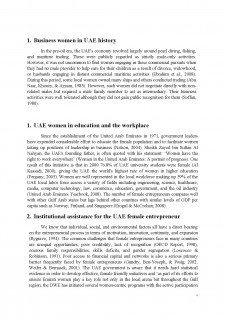 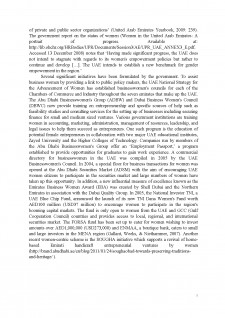 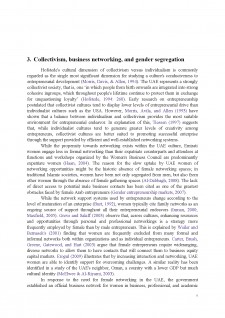 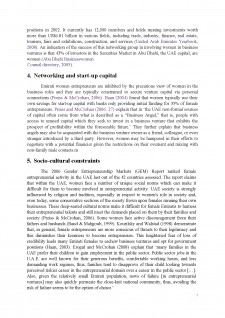 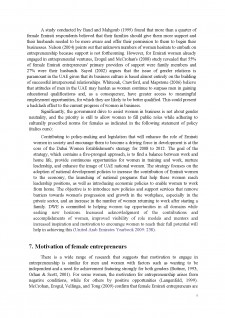 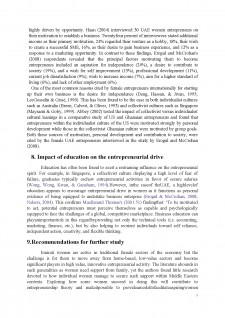 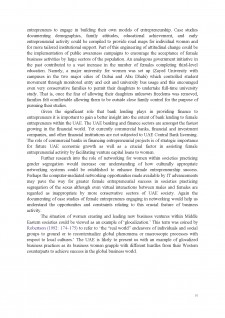 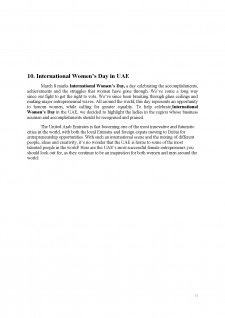 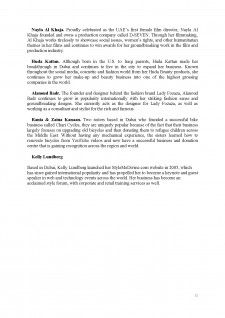 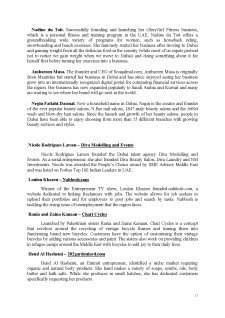 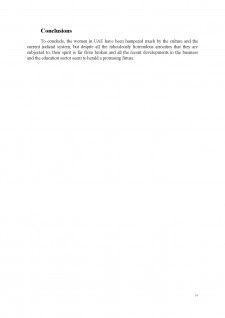