On July 21, 2002, WorldCom Group, a telecommunications company with more than $30 billion in revenues, $104 billion in assets, and 60,000 employees, filed for bankruptcy protection under Chapter 11 of the U.S. Bankruptcy Code. Between 1999 and 2002, WorldCom had overstated its pretax income by at least $7 billion, a deliberate miscalculation that was, at the time, the largest in history. The company subsequently wrote down about $82 billion (more than 75%) of its reported assets. WorldCom’s stock, once valued at $180 billion, became nearly worthless. Seventeen thousand employees lost their jobs; many left the company with worthless retirement accounts. The company’s bankruptcy also jeopardized service to WorldCom’s 20 million retail customers and on government contracts affecting 80 million Social Security beneficiaries, air traffic control for the Federal Aviation Association, network management for the Department of Defense, and long-distance services for both houses of Congress and the General Accounting Office.

The Nature of the Accounting Fraud

WorldCom’s improper accounting took two principal forms: reduction of reported line costs, WorldCom’s largest category of expenses; and exaggeration of reported revenues. The overall objective of these efforts was to hold reported line costs to approximately 42% of revenues (when in fact they typically reached levels in excess of 50%), and to continue reporting double-digit revenue growth when actual growth rates were generally substantially lower.

WorldCom initially discovered, and announced, that its financial personnel had improperly transferred $3.852 billion from line cost expenses to asset accounts during 2001 and the first quarter of 2002. Later WorldCom announced additional line cost accounting irregularities that, when combined with the first announcement, totaled $6.412 billion in improper reductions to line costs. In addition to the accounting irregularities disclosed, we have identified other manipulations of line costs. In total, from the second quarter of 1999 through the first quarter of 2002, WorldCom improperly reduced its reported line costs (and increased pretax income) by over $7 billion.

The improper line cost adjustments included, first, releases of accruals in 1999 and 2000; then, when there were no more large accruals available to release, capitalization of operating line costs in 2001 and early 2002. Line costs are the costs of carrying a voice call or data transmission from its starting point to its ending point. They are WorldCom’s largest single expense: from 1999 to 2001, line costs accounted for approximately half of the Company’s total expenses. As a result, WorldCom management and outside analysts paid particular attention to line cost levels and trends.

One key measure of performance both within WorldCom and in communications with the public was the ratio of line cost expense to revenue (the “line cost E/R ratio”). In 1999 and 2000, WorldCom reduced its reported line costs by approximately $3.3 billion. This was accomplished by improperly releasing “accruals,” or amounts set aside on WorldCom’s financial statements to pay anticipated bills. These accruals were supposed to reflect estimates of the costs associated with the use of lines and other facilities of outside vendors, for which WorldCom had not yet paid. “Releasing” an accrual is proper when it turns out that less is needed to pay the bills than had been anticipated. It has the effect of providing an offset against reported line costs in the period when the accrual is released. Thus, it reduces reported expenses and increases reported pre-tax income.

WorldCom manipulated the process of adjusting accruals in three ways. First, in some cases accruals were released without any apparent analysis of whether the Company actually had an excess accrual in the account. Thus, reported line costs were reduced (and pre-tax income increased) without any proper basis. Second, even when WorldCom had excess accruals, the Company often did not release them in the period in which they were identified. Instead, certain line cost accruals were kept as rainy day funds and released to improve reported results when managers felt this was needed. Third, WorldCom reduced reported line costs by releasing accruals that had been established for other purposes. This reduction of line costs was inappropriate because such accruals, to the extent determined to be in excess of requirements, should have been released against the relevant expense when such excess arose, not recharacterized as a reduction of line costs. 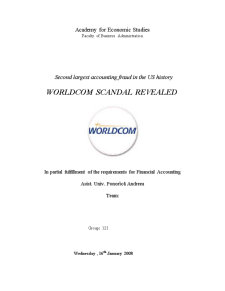 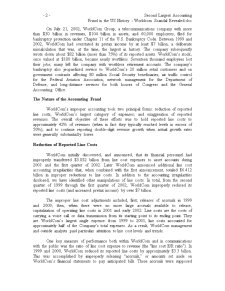 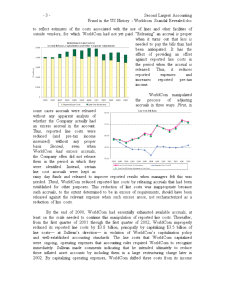 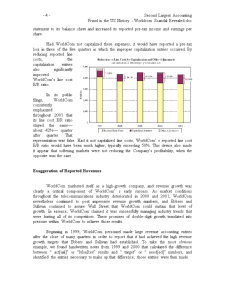 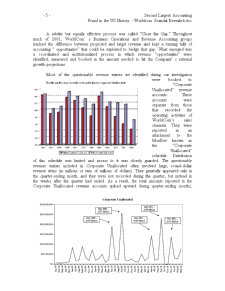 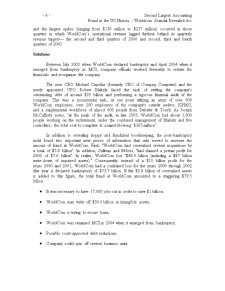 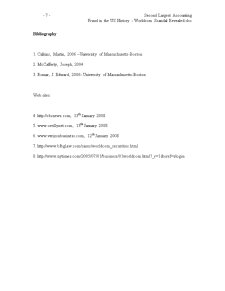 Referat
The Role of Management Accounting

Only in the last few decades has accounting become firmly established as an academic discipline, taught in universities and other educational...

Referat
The Future of Accounting

In many countries, accounting regulation is based on a system of detailed rules prescribed in standards and the law. However, rule-based systems...

1. Nature and role of Accounting People need economic information to help them taking decisions and judgements about businesses. Managers are...