Is Climate Change a result of human activities

There is currently a wide variety of controversies surrounding climate change, both in political discourse and in the media and scientific literature. The main debate is what are the causes of rising global average air temperatures, which have been rising since the middle of the 20th century, whether this upward trend is unprecedented and whether humans and human activities are the main cause of climate change. In this essay, we will analyze the main causes of climate change, both natural and anthropic, and the extent to which humans are involved in this phenomenon through their activities.

Temperatures in Europe have risen by almost 1 ° C in the last century, faster than the global average, and the fastest growth rate has been in the last 50 years. Climatic conditions have become variable: temperatures have reached extreme values; in northern Europe, rainfall and snowfall have increased significantly, leading to more frequent floods; In contrast, in southern Europe, rainfall decreased significantly and droughts became more frequent.

The issue of climate change is a topical one and, at the same time, it is one of the biggest challenges that humanity will have to face in the present as well as in the future. Rising air and water temperatures, melting glaciers, reduced drinking water supplies, droughts and floods, degradation of natural resources, and an increased risk of disease are signs that climate change is indeed happening.

As a result of global warming, glaciers are melting, causing an alarming rise in sea level. Many islands, as well as some coastal areas, will vanish in the not-too-distant future. This phenomenon will force people to migrate to higher areas, such as hills or mountains, potentially resulting in overpopulation in some locations.

At the same time, rising annual temperatures expose entire areas of land to massive vegetation fires and desertification. As a result, the land area will become smaller, the population density will increase, and the land area suitable for agriculture will decrease. People will become increasingly vulnerable to poverty, hunger, and even water scarcity. What has been well known in Africa for decades will become commonplace on other continents.

Furthermore, due to the constant accumulation of gases in the atmosphere over time, these climate changes will persist for tens, even hundreds of years, even if emissions are significantly reduced at this time. The impact of climate change will gradually worsen globally. Some forecasts indicate an increase in global temperature of about 3- 4șC by 2100, which would mean a real catastrophe for both the environment and the population. Through its consequences, such a phenomenon will call into question the very capacity of society and ecosystems to adapt.

The causes of climate change can be both natural and anthropic. The natural factors that influence and determine persistent climate change fall into two main categories: 1. Cosmic factors (solar radiation and its cycles of variation, depending on solar activity: 11, 22, 33 years, etc.; the shape of the Earth and its movements; the position of the pole axis; thermal zonation) and 2. geographical factors (water surface; atmospheric dynamics; ocean currents; tectonic movements; vegetation, etc.).

a. The Earth's orbit varies in time (90-100 thousand years) from an almost perfect circle to a very flattened ellipse and vice versa. The consequences are the change in the amount of heat that the two hemispheres receive from the Sun.

b. Variations in solar intensity, natural changes in atmospheric parameters, and the Earth's revolution can reduce or increase the total and seasonal amount of solar radiant energy received by the Earth's surface

c. Volcanic eruptions cool the climate by creating a barrier consisting of clouds of smoke and dust, drops of sulfuric acid, carbon dioxide, and water vapor that absorb solar radiation.

d. Alteration of the Earth's magnetic field can cause climate change by reversing the magnetic poles.

e. Long-term change in the processes of exchange between the atmosphere and the ocean etc.

f. The impact of meteorites on the earth's surface can have effects such as cooling the air, due to the decrease of insolation by the dust raised in the atmosphere, or its heating, due to the shock caused by the high speed of meteorites. Heating the air would form nitrogen monoxide which causes thinning or holes in the ozone layer.

These natural factors have manifested themselves since the inception of the earth, about 4.54 billion years ago, until now, leading to countless paleoclimatic changes over time, leaving a deep imprint on the earth's crust.

Some scientists suggested that natural processes were the main cause of global warming during the twentieth century. They were claiming that human-caused greenhouse gas emissions are too little to have a significant impact on the earth's climate and that the Earth can absorb any increases. Climate scientist Charles Keeling, who began measuring atmospheric CO2 at the Mauna Loa observatory in Hawaii, has contradicted their claims. He was the first scientist to prove that CO2 levels in the atmosphere were rising rather than being absorbed completely by forests and oceans.

Other studies made in the last decades prove the anthropogenic activities that cause climate change are accelerated deforestation, pollution, and the burning of increasing amounts of fossil fuels, resulting in changes in the concentration of greenhouse gases in the atmosphere and emissions of a variety of aerosols. As a result, the proportion of carbon dioxide in the atmosphere increases, leading to an increase in its greenhouse effect. Research shows that in Europe, carbon dioxide is 80% responsible for the formation of the greenhouse effect, and its share in the atmosphere has increased by 40% in the last 200 years. Coal, oil, and natural gas are used in various industries, especially for electricity production and transportation. These key areas are involved in the operation of most types of businesses and play a key role in people's activities. 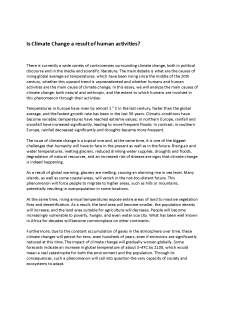 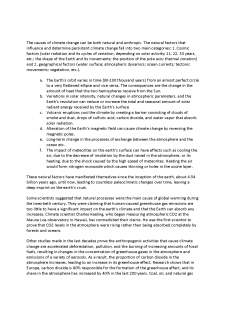 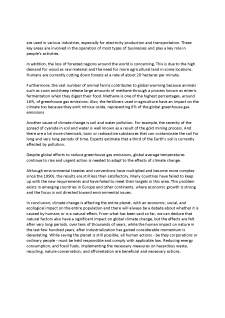 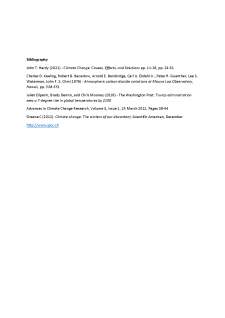 Précis I have chosen this topic as I am really interested in the environmental issues and I also think that protecting our planet must be one of...