Demonstrate how best practice can contribute to the latter

The differences between Project Success and Project Management Success

In order to distinguish between the project success and project management success it is necessary to develop distinct definitions and explanation for the two different concepts.

Throughout history the importance of project management has seen a major increase because, both at European and international level, more actions are carried out in projects. Project is a specific activity or process carried out to achieve a specific output which could be a service, specific product or a desired result. Project success has been widely discussed in literature and traditionally a project is considered to be successful if is completed on-time and on-budget with all features and functions as initially specified. Talking about project success we have to think that this is something much more complex. In an attempt to give a definition closer to reality a set of elements has been developed. According to many researchers those elements are responsible for the final result of a project and are they are called success criteria. Success criteria are those measures that we use to evaluate how good the project has been , if did meet the stakeholders’ expectation, those measure variables that we use to measure the success of a project from the point of view of our stakeholders, from the point of view of the client. Many studies have shown that project success and failure is a question of perception and that the criteria could vary from project to project (Wateridge 1995). Determining project success is a complex and ambiguous activity, is still not clear how to measure it because project stakeholders perceive project success or failure differently. A project that has been perceived to be a failure by one stakeholder may be perceived as a success by another [Bennatan 1996]. How do we know that the project was a success or not? Project success criteria is one of the topics in the project management plan and for answering the question the project manager needs to work closely with the stakeholders to ensure that the project deliverables have met their expectations . Stakeholders including the organization benefit from the projects only if it satisfies them. Therefore, execution of projects is done bearing in mind who the end users are and how they will benefit once the projects are completed successfully. It is the responsibility of the project management team to ensure that all parties associated with the project directly or indirectly are satisfied with the outcome (Lang, 2007). Perception plays a huge part in evaluating the success or failure of a project and for that reason we can say that client satisfaction is measured how they perceive the success. The stakeholders value how the project should be, if is a success or a failure. During the lifecycle of a project it is very possible that problems arise. In this situation certain changes have to be made which may involve compromises to keep the project either on schedule or within cost. For these compromises to be acceptable or permissible depends on their scope and requires the approval of the stakeholders. A necessary condition for the project to be successful identified by John Wateridge it was to agree the success criteria with all the stakeholders before starting the project and repeatedly at configuration review point throughout the project. All the stakeholders must have a common vision of what it is trying to be achieved by project and working towards the same end objective. When we talk about project success we are thinking at project success from the point of view of the outputs and from the point of view of outcomes. The outputs are the technical deliverables produced for the project and the outcomes are the values measured by the stakeholders. 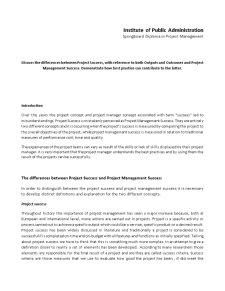 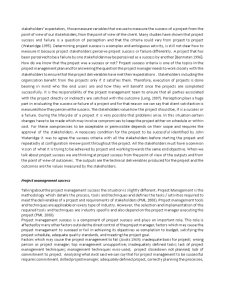 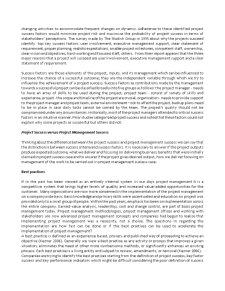 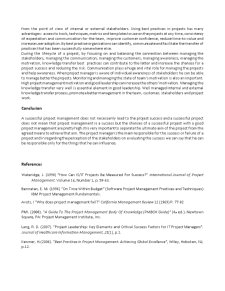