To begin with, our project is sharing a remarkable story about the evolution of an iconic brand and the company that bears its name. Since its birth at a soda fountain in downtown Atlanta, Georgia, in 1886, Coca‑Cola has been a catalyst for social interaction and inspired innovation. These unique moments in history, arranged in chronological sequence, have helped create a global brand that provides billions of moments of refreshment every day.

For example, in Romania, the Coca-Cola Company contains several trademarks such as:

Coca-Cola is enjoyed in the United States

Coca-Cola made its debut in Atlanta, at the Jacobs’ Pharmacy soda fountain, where it sold for 5 cents a glass.

It was 1886, and in New York Harbor, workers were constructing the Statue of Liberty. Eight hundred miles away, another great American symbol was about to be unveiled.

Like many people who change history, John Pemberton, an Atlanta pharmacist, was inspired by simple curiosity. One afternoon, he stirred up a fragrant, caramel-colored liquid and, when it was done, he carried it a few doors down to Jacobs' Pharmacy. Here, the mixture was combined with carbonated water and sampled by customers who all agreed -- this new drink was something special. So Jacobs' Pharmacy put it on sale for five cents a glass.

A century later, The Coca-Cola Company has produced more than 10 billion gallons of syrup. Unfortunately for Pemberton, he died in 1888 without realizing the success of the beverage he had created.

Over the course of three years, 1888-1891, Atlanta businessman Asa Griggs Candler secured rights to the business for a total of about $2,300. Candler would become the Company's first president, and the first to bring real vision to the business and the brand.

Asa G. Candler, a natural born salesman, transformed Coca-Cola from an invention into a business. He knew there were thirsty people out there, and Candler found brilliant and innovative ways to introduce them to this exciting new refreshment. He gave away coupons for complimentary first tastes of Coca-Cola, and outfitted distributing pharmacists with clocks, urns, calendars and apothecary scales bearing the Coca-Cola brand. People saw Coca-Cola everywhere, and the aggressive promotion worked. By 1895, Candler had built syrup plants in Chicago, Dallas and Los Angeles.

Inevitably, the soda's popularity led to a demand for it to be enjoyed in new ways. In 1894, a Mississippi businessman named Joseph Biedenharn became the first to put Coca-Cola in bottles. He sent 12 of them to Candler, who responded without enthusiasm. Despite being a brilliant and innovative businessman, he didn't realize then that the future of Coca-Cola would be with portable, bottled beverages customers could take anywhere. He still didn't realize it five years later, when, in 1899, two Chattanooga lawyers, Benjamin F. Thomas and Joseph B. Whitehead, secured exclusive rights from Candler to bottle and sell the beverage -- for the sum of only one dollar.

Coca-Cola is enjoyed in 163 countries worldwide.

During the ‘70s, Coca-Cola thrilled the world with its exciting and dynamic advertising.

A World of Customers

After 70 years of success with one brand, Coca-Cola®, the Company decided to expand with new flavors: Fanta®, originally developed in the 1940s and introduced in the 1950s; Sprite® followed in 1961, with TAB® in 1963 and Fresca® in 1966. In 1960, The Coca-Cola Company acquired The Minute Maid Company, adding an entirely new line of business -- juices -- to the Company. 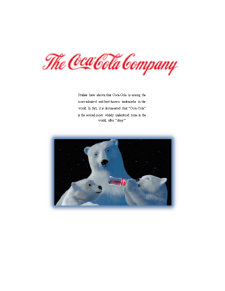 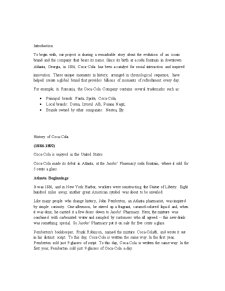 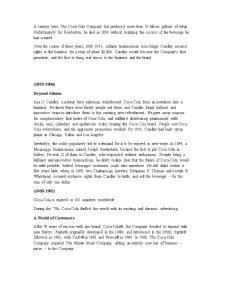 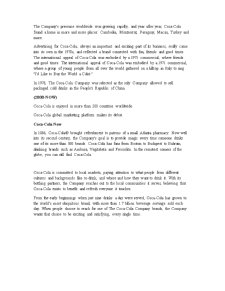 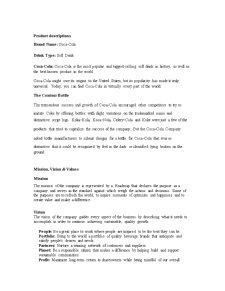 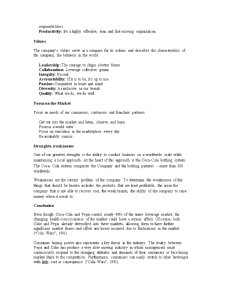 Although Coca-Cola was first created in the United States, it became popular very soon wherever it went. The first international bottling plants...