Once you have arrived in London, there are assorted places that you should, you really should, go and see.

A good starting place is Trafalgar Square with Nelson’s Column right in the centre. It is a 51m column, poised on top of which is the hero of the Battle of Trafalgar, who was killed while winning in 1805. The four lions which surround the column are of more recent date, having been sculpted by Sir William Landseer in 1868. There are many claimants to being the heart of London, but Trafalgar Square has the best right, because it is the hub of so much that is wonderful.

Just alongside is the church of St Martins in the Fields, which is open throughout the day and has been around for a long time. The current church dates from 1726, but there has been a church on that site since the thirteenth century. This is the parish church for Buckingham Palace and, yes, there is a royal pew. The church has some wonderful lunch time concerts, which are normally free.

On the next side of the square is the National Portrait Gallery, which is fascinating because it has the largest collection of portraits in the world although, understandably, only part of the collection is on show at any one time. Behind is Charing Cross station, not of great interest except that in the side road running alongside is The Players Theatre, old time music hall where the audience is expected to dress up in the right costume and positively join in with the show.

Running from there is the Strand, which was once the fashionable thoroughfare of London but fell on slightly seedier times. It is currently being upgraded and it still contains the Savoy Hotel - one of the great hotels of the world.

If you reverse your course from Trafalgar Square, you will go up the Mall, past Horse Guards Parade and at the end is the impressive building which is Buckingham Palace. And you pass St James on the way up.

So that’s one quick fix on part of London from one central point. But London has so many other central points. You can do the same sort of orientation from Piccadilly Circus or Hyde Park Corner or, indeed, pretty much anywhere. Once you have your bearings you can start to concentrate on specific areas.You might like to start with the Houses of Parliament, which have been operating in one form or another since 1275. Worth knowing that the original Parliament was in St Stephen’s Chapel and the members sat in the choir stalls facing each other. That tradition carries on to this day. 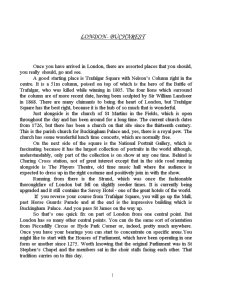 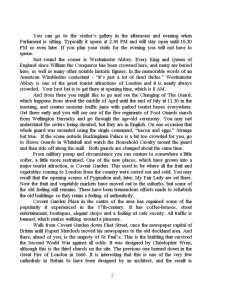 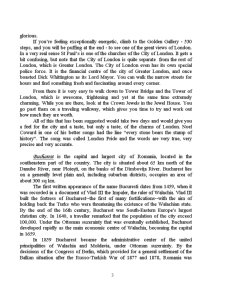 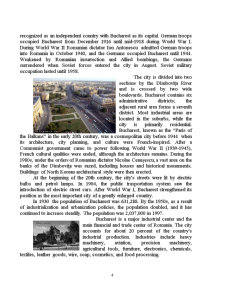 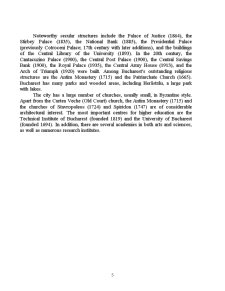 Drugs Abuse in U.K. and Romania I choose to write about this subject because drugs abuse is a problem, which weighs heavily on any country, no...

The megalithic ruin known as Stonehenge stands on the open downland of Salisbury Plain two miles (three kilometres) west of the town of Amesbury,...

Millions of women throughout the world live in conditions of abject deprivation of, and attacks against, their fundamental human rights for no...

Chapter Introduction porting events and changes are influenced by the economic, social and political situations in place at the time. In...

London (England), city, capital of the United Kingdom. It is situated in south-eastern England at the head of the River Thames estuary. Settled by...