Milka is a prestigious brand of Kraft Foods International, located in the premium segment of the Romanian chocolate market and it talks mostly to « the young consumer at any age ».

Best sold product on premium segment is the Milka chocolate. Milka is the brand with the quickest growth on the market, tripling the share in the last 3 years, according to the dates from Kraft.

The name “Milka”, represents actually the joining of first syllables of the words milk (Milch) and cocoa (Kako) from German. In 1901 “The Purple Law” sees day light, when the brands name “Milka” is registered. Since the package appeared it was purple,on it was printed a cow and a panoramic view of the Alps. The Milka logo it’s the same with the commercial name and it appears on the package in a stylized graphic printing the logo in white on a purple background.

Next to the brand name is the mascot of Milka brand, a purple cow and in relief the Alps are emphasized.

Now the Milka slogan is represented by the sentence “Milka- The most delicated pleasure since chocolate exists”.

1901- The year of the birth of MILKA: Registring the brand at the registred brands office near the royal court of Berlin. The name deriving from the combination of the two basic elements from the chocolate composition- milk and cocoa. The package is from the beginning purple.

1908- The name Milka is often in the foreground.

1913- Only in the chocolate factory from Lörrach produces over 18 times more chocolate comparing to the year of founding the factory.

1922- The appearence of a cow, accompanied by man.

1960- Printing MILKA will be in white with a purple background.

1988- Printing MILKA, the cow and the alpine landscape are the images which will allways be on the package.

2002- Official launch of the Milka chocolate in Romania was marked by a show with lights at the Ntional Theater from Bucharest.

The system of supporting the product

Milka is one of the most appreciated chocolates on the Romanian market having a large range of products for every tastes.

First chocolate tablet was preperated by Philippe Suchard. In 1823, he opened his own factory where he produces chocolate after a recipe created and experienced by him. In 1880 the first foreign branch of his factory was opened at Lorach, in Germany, so that in 1888 a second branch will be opened in Bluedenz, Austria, then whole Europe.

In 1994, Kraft Foods International opened a branch in Romania, at Brasov, so the famous recipe, improved, in one and a half century got in our country.

First, the package needs to reflect, in design words, the identity of the brand.

The Milka package is characterized through a simple color palette, horizontally orientation of the tablet( in most cases except package from Milka Luflee Alpine Milk, Milka Luflee Noisette and Milka Diet Milk from the Alps which has a vertically orientation) packaged secondly in tinfoil. According to the color Milka presents a combination between a non-color and a color : white and purple. An unmissed element from the Milka package is the logo. 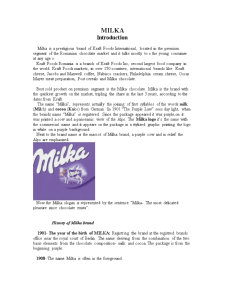 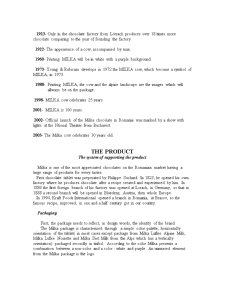 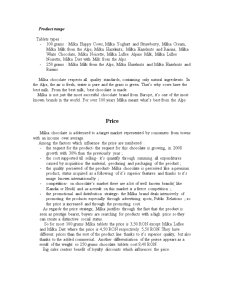 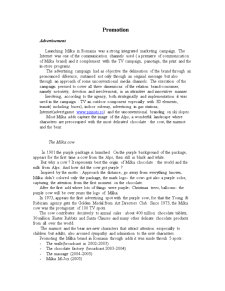 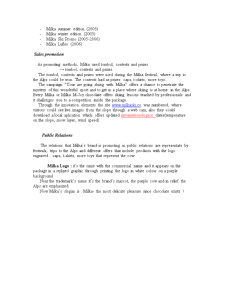 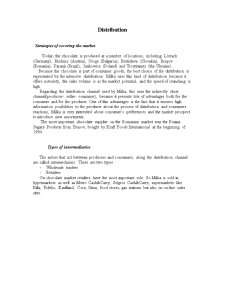 GROUP DANONE One important strength for the success of global expansionwas still lacking – a corporate name with resonance. In June 1994, it was...

Wall Frescos The wall painting were executed by premier painters of the Quattrocento: Perugino, Botticelli, Ghirlandaio, Rosellini, Signorelli and...

1. General presentation Established in 1949, Vincon Vrancea developed its activity within the years and become one of the most outstanding...