Air Pollution, addition of harmful substances to the atmosphere resulting in damage to the environment, human health, and quality of life. One of many forms of pollution, air pollution occurs inside homes, schools, and offices; in cities; across continents; and even globally. Air pollution makes people sick—it causes breathing problems and promotes cancer—and it harms plants, animals, and the ecosystems in which they live. Some air pollutants return to Earth in the form of acid rain and snow, which corrode statues and buildings, damage crops and forests, and make lakes and streams unsuitable for fish and other plant and animal life.

Factory smoke darkens the sky above Prague, Czech Republic. The Czech Republic faces a severe air pollution problem that is choking the nation’s land. Air pollution and subsequent acid rain has killed or damaged many of the country’s trees and badly degraded its soil.

Pollution is changing Earth’s atmosphere so that it lets in more harmful radiation from the Sun. At the same time, our polluted atmosphere is becoming a better insulator, preventing heat from escaping back into space and leading to a rise in global average temperatures. Scientists predict that the temperature increase, referred to as global warming, will affect world food supply, alter sea level, make weather more extreme, and increase the spread of tropical disease.

Most air pollution comes from one human activity: burning fossil fuels—natural gas, coal, and oil—to power industrial processes and motor vehicles. Among the harmful chemical compounds this burning puts into the atmosphere are carbon dioxide, carbon monoxide, nitrogen oxides, sulfur dioxide, and tiny solid particles—including lead from gasoline additives—called particulates. Between 1900 and 1970, motor vehicle use rapidly expanded, and emissions of nitrogen oxides, some of the most damaging pollutants in vehicle exhaust, increased 690 percent. When fuels are incompletely burned, various chemicals called volatile organic chemicals (VOCs) also enter the air. Pollutants also come from other sources. For instance, decomposing garbage in landfills and solid waste disposal sites emits methane gas, and many household products give off VOCs.

Some of these pollutants also come from natural sources. For example, forest fires emit particulates and VOCs into the atmosphere. Ultrafine dust particles, dislodged by soil erosion when water and weather loosen layers of soil, increase airborne particulate levels. Volcanoes spew out sulfur dioxide and large amounts of pulverized lava rock known as volcanic ash. A big volcanic eruption can darken the sky over a wide region and affect the Earth’s entire atmosphere. The 1991 eruption of Mount Pinatubo in the Philippines, for example, dumped enough volcanic ash into the upper atmosphere to lower global temperatures for the next two years. Unlike pollutants from human activity, however, naturally occurring pollutants tend to remain in the atmosphere for a short time and do not lead to permanent atmospheric change.

Automobile exhaust contains unburned hydrocarbons, particulates, carbon dioxide, and oxides of nitrogen and sulfur that contribute to acid rain, smog, and global warming. The oxides combine with water vapor in the air to form acids, which return to the ground as acid rain. Smog, a mixture of smoke (particulates) and fog, irritates the eyes, throat, and lungs and also damages plants. Photochemical smog, a particularly harsh form of smog, is created when sunlight triggers a chemical reaction between the unburned hydrocarbons and the oxides of nitrogen in automobile exhaust. Carbon dioxide, produced from the burning of fossil fuels including gasoline, is the leading cause of the greenhouse effect, a phenomenon thought to be responsible for rising global temperatures.

Once in the atmosphere, pollutants often undergo chemical reactions that produce additional harmful compounds. Air pollution is subject to weather patterns that can trap it in valleys or blow it across the globe to damage pristine environments far from the original sources. 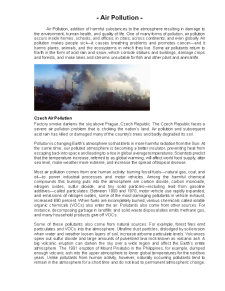 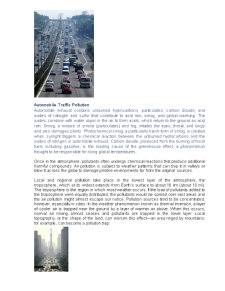 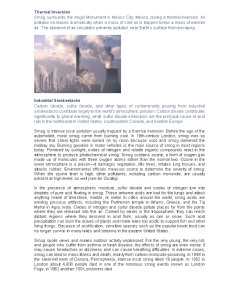 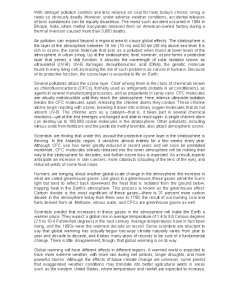 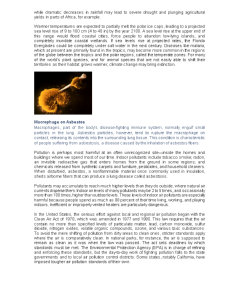 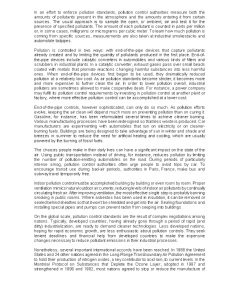 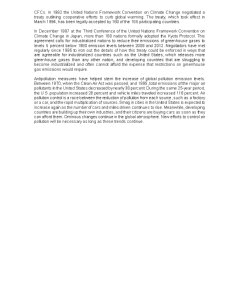 Since the creation of the European Union its purpose has been to unite the European continent into one cohesive organization. In order for this...

Global Dimming Global dimming is the gradual reduction in the amount of global direct irradiance at the Earth's surface that was observed for...

Referat
The Sustainable Development of România

Introduction The concept of sustainable development has emerged in the seventies due to the general concern about the global environment, as a...

Tourism and the environment have a very multifaceted relationship. The idea of tourism is based almost completely on mans desire to get out and...

ARGUMENT Motto: The forest is not only a positive value with health, but also for the soul of a nation ALPHONSE ALLAIS DEFINITION OF THE FOREST...