Romania, republic in southeastern Europe, bounded on the north by Ukraine, on the east by Moldova, on the southeast by the Black Sea, on the south by Bulgaria, on the southwest by Serbia (a constituent republic of the Federal Republic of Yugoslavia), and on the west by Hungary. Bucharest is its capital and largest city.

Although rich in culture and natural resources, Romania has long been one of Europe’s poorest and least developed nations. Foreign powers, including the Ottoman and Austro-Hungarian empires, controlled the country for much of its history. In 1948 Communists took control of Romania and modeled the government and economy after those of the Union of Soviet Socialist Republics (USSR). However, in the 1960s Romania’s Communist leaders began to distance themselves from the USSR and develop their own domestic and foreign policies. Romania’s economy grew during the 1960s and 1970s, but by the 1980s most Romanians were suffering from food shortages and other economic hardships. In 1989 Romanians revolted against the repressive dictatorship of Nicolae Ceauºescu, the country’s president and Communist Party leader. Ceauºescu was executed, and a non-Communist government was installed. The first free multiparty elections took place in Romania in 1990.

Romania has a total land area of about 237,500 sq km (about 91,700 sq mi). The country is roughly oval in shape, with a maximum distance from east to west of about 720 km (about 450 mi) and a maximum distance from north to south of about 515 km (about 320 mi). A long chain of mountain ranges curves through northern and central Romania. The Danube River forms much of the country’s southern and southwestern borders with Bulgaria and Serbia, and the Prut River divides Romania from its northeastern neighbor Moldova.

A Natural Regions Transylvania, an extensive elevated plateau region that reaches a maximum height of about 600 m (about 2000 ft), occupies most of central and northwestern Romania. Transylvania is surrounded by the Carpathian Mountains, a large mountain system of central and eastern Europe. The Eastern Carpathians extend from the northern border to the center of the country and contain the forested region of Bukovina; the Southern Carpathians, also known as the Transylvanian Alps, stretch westward from the Eastern Carpathian range; and the Western Carpathians traverse the western portion of Romania. The Southern Carpathians contain the country’s highest peak, Moldoveanu, which reaches an elevation of 2543 m (8343 ft). The geological structure of the Carpathians has given rise to severe earthquakes: in 1977 an earthquake with a magnitude of 6.5 on the Richter scale inflicted serious damage on Bucharest and claimed more than 1500 lives. Another earthquake measuring 6.0 was registered in 1990.

The areas stretching outward from Romania’s mountainous interior contain hills and tablelands full of orchards and vineyards, and flat lowlands where cereal and vegetable farming takes place. Western Romania is dominated by the Tisza Plain, which borders both Hungary and Serbia; the section of the plain that borders Serbia is generally known as the region of Banat, while the section that borders Hungary is commonly referred to as Criºana-Maramureº. To the east of central Romania, stretching from the Carpathians to the Prut River along the Moldovan border, lies the region of Moldavia. Southern Romania contains the region of Walachia, which stretches from the southernmost mountains to the Danube and contains the city of Bucharest. The small region of Dobruja, located in the extreme southeast between the Danube River and the Black Sea, is an important tourist center. 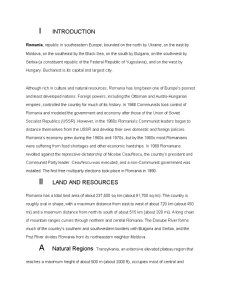 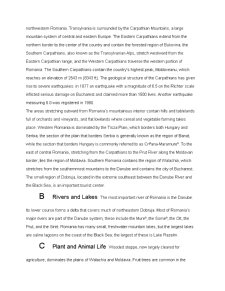 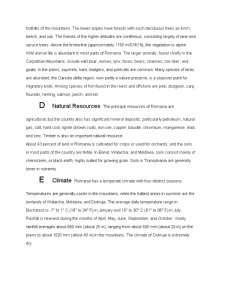 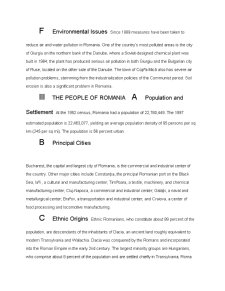 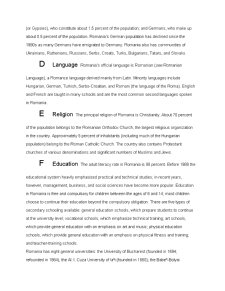 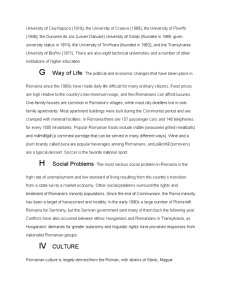 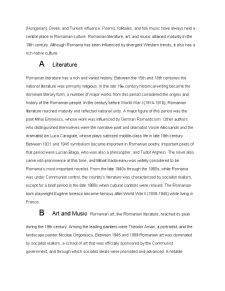 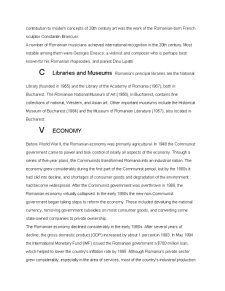 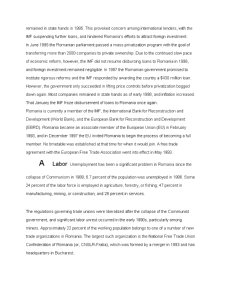 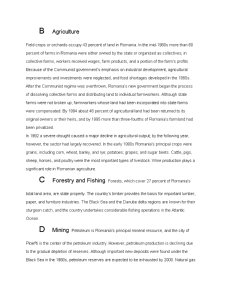 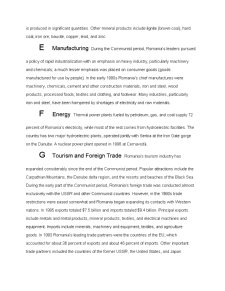 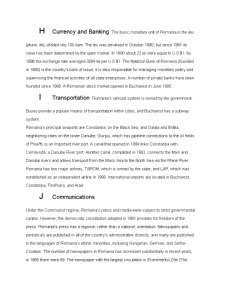 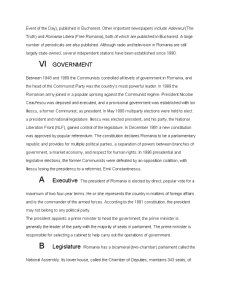 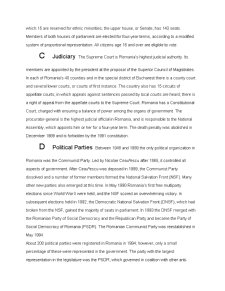 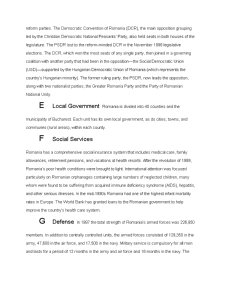 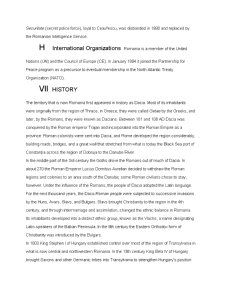 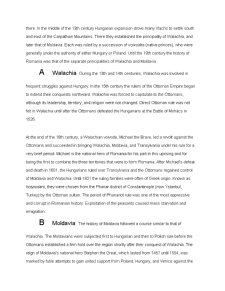 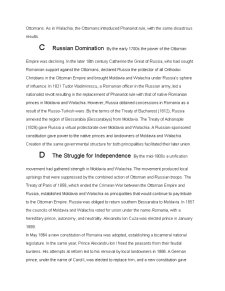 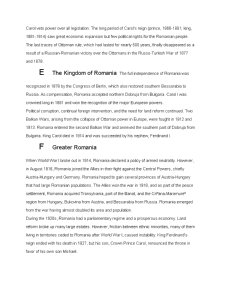 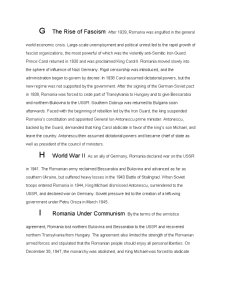 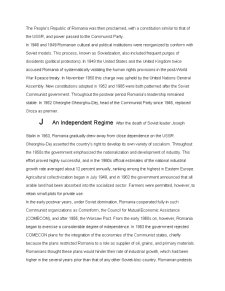 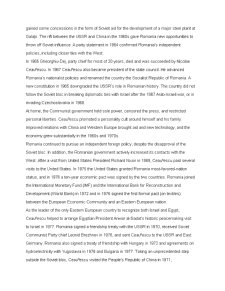 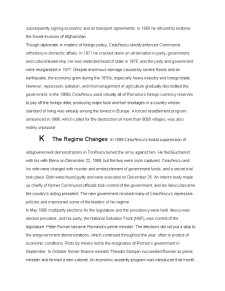 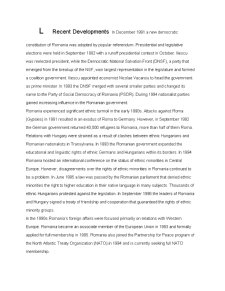 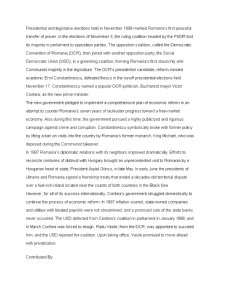 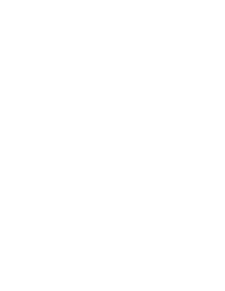 The Program “ European Cultural Capital”, held jointly this year by Sibiu and Luxembourg, was initiated in 1985 by the Council of Ministers of...

In my opinion, the ideal resort is Hawaii’s Big Island because is a magnificent place. There are primarily six major islands to visit in Hawaii:...

Unemployment is the condition of not having a job, often referred to as being "out of work", or unemployed. Not having a job when a person needs...

Referat
The Sustainable Development of România

Introduction The concept of sustainable development has emerged in the seventies due to the general concern about the global environment, as a...

Emblem and flag The significance of the combined elements: The head of aurochs, ancient symbol of Maramures, recalled the departure of Dragos...