Romania is a country with a long and complicated history. It also has a variety of customs, traditions and holidays. Some of the holidays are celebrated throughout the whole country; others are designated for specific regions of the country.

The Romanian holidays have preserved the foundations of family structure and organizations, as well as the patterns defining social groups. The holidays reflect rules of behavior that originated in the Roman and Byzantine civilization.

The focus of most Romanian spirituality is found in each village. The trades of the villages were mainly agricultural. Romanians traditionally were farmers who worked the land, kept vineyards, raised cattle or lived as shepherds.

Delicate, graceful and sober--the popular art of Romania was preserved by the village. Village leaders assumed the tasks of guarding the originality, individuality and permanency of artisans' work.

The Romanian customs can be divided into family customs, calendar-based customs and religious customs. They represent a "triptych" marked by the three major life changes: birth, marriage and death.

A birth signifies its own customs, related to the mother and to the baby. During a pregnancy, a prospective mother must observe some interdictions that will protect the baby from supposed evil spirits.

The birth itself represents the transition from the unknown to the known world--or from the "blackness" to the "whiteness."

The ceremony of the "first bath" is one of the most important Romanian traditions. Only the women can assist in the bathing of the newborn child, and the oldest woman related to the father of the baby is in charge of the event. Fresh, clean water enriched with flowers, money, honey and milk are thought to purify and join the newborn to the family. The elder woman gives the cleansed baby to the mother with wishes for the child's moral, spiritual and physical integrity. She wishes for the child to marry, to be good-looking and healthy, to be respectful of his or her parents and to be a patient person. She wishes that the child thrives, grows to maturity, becomes hardworking and experiences good luck in life.

The second important moment related to birth is the Christening of the child, a ceremony in which the child is named. In the Eastern Orthodox church, the spiritual, or "God-parents" of the child have an important ceremonial function. Usually, the child will be named after the God-father, or after a close family member. Later, the God-parents will play an important role in the wedding ceremony of the child.

The practice of weddings includes the moments when young people separate from their social groups. Additionally, there is the separation of the bride from her parents which is followed by her joining the bridegroom's family. Lastly, there is the union of the two young people and the integration of the bride into her new family. (Prior to the marriage is the betrothal which is followed by a long process of acceptance towards the prospective couple by the existing group of those who are already married.)

The wedding is a performance with well-established rituals. Poetry, song, dance and ceremonial costumes all have a detailed role in the wedding ceremony.

This ceremony begins when the spokesman of the bridegroom comes to the bride's home to woo her. During this time, the best men go throughout the village inviting the relative and friends to the wedding. Then, before the closed gates guarded by the bride's relatives, the bridegroom's best man tells a story. It is the story of a young emperor who gathered a great army and went hunting. While hunting, he saw a fairy and sent his warriors to look for her. Following the fairy's trail, they arrive at the bride's house. They have been told that there is a certain flower in the garden. This flower cannot bear fruit because of the unsuitable soil in which it grows. The warriors came to pick the flower and plant it in the young emperor's garden. There, the soil was known to be good and provide the nutrients enabling the flower to bear fruit.

The dress and hairdressing of the bride is also important. She wears a ceremonial costume and flowers in her hair.

In the western part of Transylvania, in Bihor, the bridegroom must pass a test of cleverness. He must solve a series of riddles in order to prove that he is able to be part of the married community.

The entrance of the bride into the community of married women is marked by a change of her hair style, and the covering of her head with a scarf. The scarf is a symbol of the married women. This ceremony is also accompanied by a song.

Just as for a medieval meal, the wedding meal provides an opportunity for singing, dancing and listening to epic hero songs. Dance forms, especially for the young people, are an essential part of the wedding, as well as the birth ceremonies. One dance, called a "hora" marks the decisive moments of the ceremonial. It is a seal of the marriage contract. 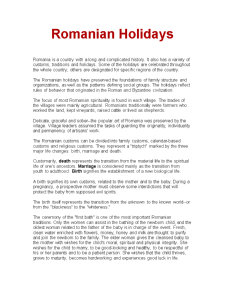 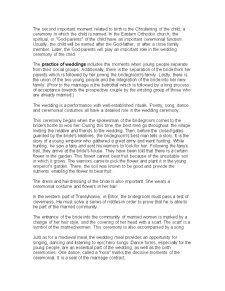 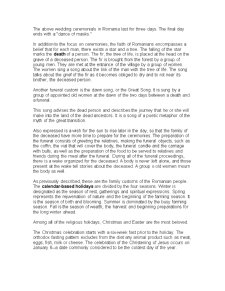 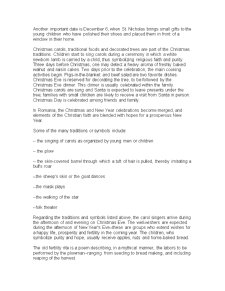 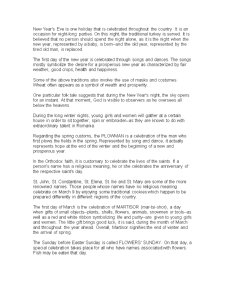 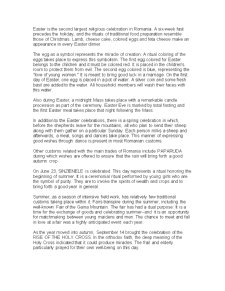 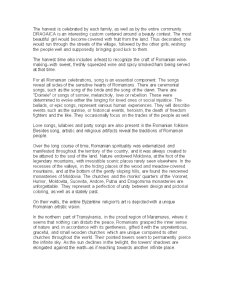 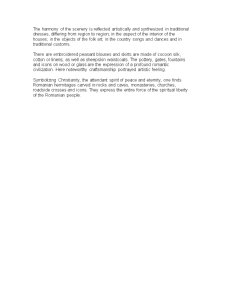 1.Introduction England is a country to the northwest of Continental Europe and is the largest and most populous constituent country of the United...

Within South Eastern Europe however, Romania preserved a significant number of traditional customs and celebrations manifest within the strong...

London is home to some of the world's most famous landmarks. Take a personal driver/guided seven hour tour around this ancient city taking in some...

HEALTHY FOOD The people should eat healthy food for strong bones and healthy teeth.The healthest foods are vegetables and fruits. For example the...

Referat
A Piece from the Romanian Mythology

The rural romanian mythology, so poor apreciated and renowned is in fact very beautiful and interesting to study thoroughly. I am saying this...

Mission & Vision - Mission Our mission is to provide and promote an efficient market, with fair rules, attractive and compatible with European...

Within South Eastern Europe however, Romania preserved a significant number of traditional customs and celebrations manifest within the strong...

1. Choosing the field of activity and target market AMEY BOUTIQUE Company Ltd. based in Iasi on Stefan cel Mare No. 5 is specialized in...

Referat
Difference Between the Romanian and American Holidays

Romania is a country with a long and complicated history. It also has a variety of customs, traditions and holidays. Some of the holidays are...