Have you ever been to the Romanian seaside? If not, the following notes may encourage you to do so. If yes, they may be a good reason for you to come back.

Blessed with an unpolluted sea, golden sands, and warm weather from spring to autumn, the Romanian Black Sea Coast is a blend of old and new. The beaches are there; the modern hotels and facilities are there; a wealth of inland attractions, from castles to vineyards, are there, many historical sites, ancient monuments, traditional villages together with the traditional culture of the region, which is a mixture of Romanian, Greek, Macedonian and Turkish influences, coexist with all the modern facilities offered by the resorts. Now, with the country heading towards a new, strong future, the Black Sea is destined to become a major European holiday destination.

Located in the south-east of Romania, guarded by the waters of the Danube and of the Black Sea , what appears as a natural citadel is Dobrogea. It is here that we find the sea coast.

Dobrudja and its access to the Black Sea may arouse visitors' interest and make them enjoy their stay there any other time of the year due to its unique mixture of natural sights and historic attractions. For in the area a pleasant surprise is to discover traditional villages and rural civilization not far from modern seaports, vineyards, orchards, ancient monuments and remnants along with a whole network of modern holiday resorts situated along the Romanian shore of the Black Sea.

The entire complex of sand, air, sun and water is a beneficial one.The air is well-ionised, rich in marine aerosols, the sand beaches are generally natural ones, the high solar radiation intensity is said to have stimulating and healing effects and it has long been known for cures of arthritic, rheumatic, internal and nervous disorders .

Warmed up by the sun all summer long, that is from May until September, the sea which has been called for centuries Pontus Euxinus or the Hospitable Sea is still there, awaiting for visitors to come and have a good time.

From North to South, from the Chilia branch of the Danube to the border with Bulgaria, these are the Romanian resorts on the Black Sea coast: Navodari, Mamaia, Constanta, Eforie Nord, Eforie Sud, Techirghiol, Costinesti, Olimp, Neptun, Jupiter, Aurora, Venus, Saturn, Mangalia, 2 Mai and Vama Veche.

The gateway to all the resorts is the city of Constanta, Romania's largest port and second largest city.

Developed upon the ancient ruins of the Greek stronghold Tomis, Constanta has always been a centre of ethnic and spiritual diversity, a pole of economic exchanges in the Black Sea region and in South-Eastern Europe.

Ancient Tomis has been associated with the legend of Jason and of the Argonauts who embarked on a long voyage from Greece to the Asian country of Colchis on the Black Sea Coast in search of the Golden Fleece. On their return voyage, they laid anchor on the site on which the town of Tomis was to be later on built. Under the Roman rule, Tomis became a prosperous city, graced with statues, temples and a monumental architecture. With Constantinople as the capital of the Eastern Roman Empire, Tomis was rebuilt by Constantine the Great who changed its name to Constantiana (from which the present name of the city has been derived), in honor of his sister. The important events connected to Constanta as a seaport were the building of a lighthouse by the Genovese in the 13th century and the development of the harbor; the Turkish occupation that lasted till 1877 brought about no notable change or improvement. It is only after 1877 that Constanta came close to its past glamour, as it started to be a flourishing trade port with a railway which ensured also land transportation.

Best place for seeing the evidences of the old civilization is the National History and Archeology Museum, in Ovidiu Square. It houses interesting exhibits and ancient art objects, among which a menhir statue belonging to the prehistoric culture of Hamangia representing a female goddess, the statues of Fortuna and Pontos, the patron protectors of ancient Tomis, as well as the Glycon serpent having a snake body but human hair and ears. One should not miss the superb multicolored mosaic of the 13th century situated in the close vicinity of the Town Hall.

By the early 1900's Constanta was a fashionable seaside resort frequented by European royalty. The pituresque old town has a peaceful Mediterranean air. The city is the main transport hub on the Black Sea coast and the gateway to other resorts.

Constanta attracts by the harmony between ebulient business world and intense cultural life. Constanta has always been a centre of ethnic and spiritual diversity, a pole of economic exchanges in the Black Sea region and in South-Eastern Europe. 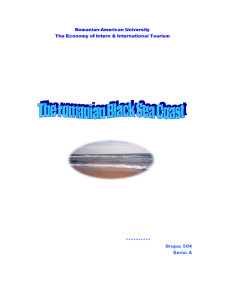 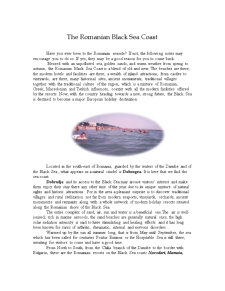 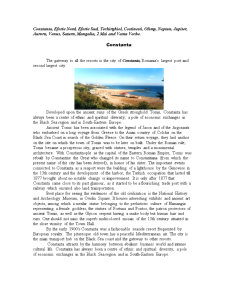 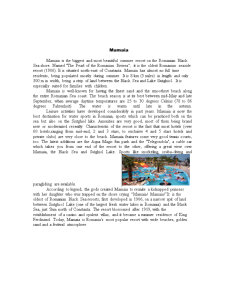 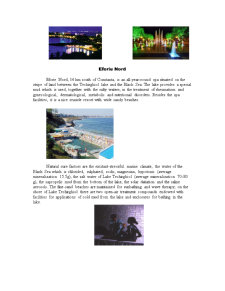 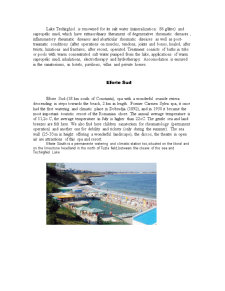 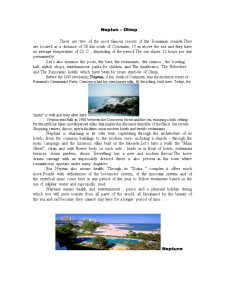 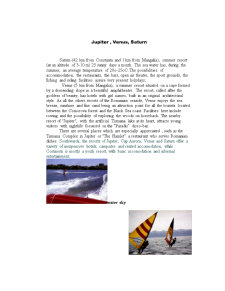 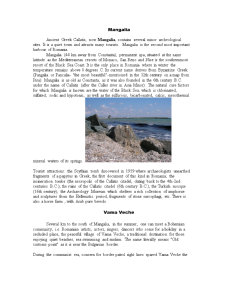 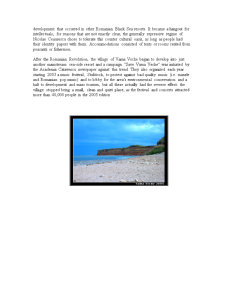 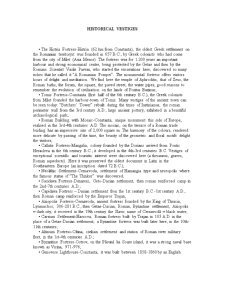 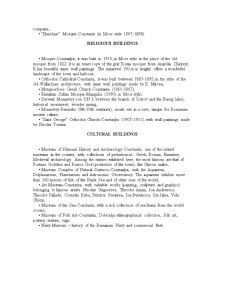 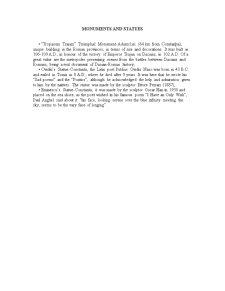 Constituted as a real outpost for the whole touristic activity in the northern part of Moldavia and Bucovina, the Touristic Complex "HANUL GHIOCEL"...

Romanian Holidays Romania is a country with a long and complicated history. It also has a variety of customs, traditions and holidays. Some of the...

INTRODUCTION Romania, republic in southeastern Europe, bounded on the north by Ukraine, on the east by Moldova, on the southeast by the Black...

A brief definition, but should be concise that e-learning word that could translate as electronic learning (e-learning), means the acquisition of...