The wall painting were executed by premier painters of the Quattrocento: Perugino, Botticelli, Ghirlandaio, Rosellini, Signorelli and their respective workshops, wich included Pinturicchio, Piero di Cosimo and Bartolomeo della Gata. The subjects were historical religious themes, selected and divided according to the medieval concept of the partition of the world history into there epochs: before the Ten Commandments were given to Moses, between Moses and Christ’s birth, and the Christian era thereafter. They underline the continuity between the Old Covenant and the New Covenant, or the transition from the Mosaic law to the Christian religion.

The walls were painted over an astonishingly short period of time, barely eleven months, from July, 1481 to May, 482. The painters were each required first to execute a sample fresco; these were to be officially examined and evaluated in January, 1482. However, it was so evident at such an early stage that the frescoes would be satisfactory that by October 1481, the artists were given the commission to execute the remaining ten stories.

The pictorial programme for the chapel was comprised of a cycle each from the Old and New Testament of scenes from the lives of Moses and Christ. The narratives began at the altar wall - the frescoes painted there yielding to Michelangelo's Last Judgment a mere thirty year later - continued along the long walls of the chapel, and ended at the entrance wall. A gallery of papal portraits was painted above these depictions, and the latter were completed underneath by representations of painted curtains. The individual scenes from the two cycles contain typological references to one another. The Old and New Testament are understood as constituting a whole, with Moses appearing as the prefiguration of Christ.

The two most important scenes from the fresco cycle, Perugino's Christ Giving the Keys to St. Peter and Botticelli's The Punishment of Korah; both contain in the background the triumphal arch of Constantine, the first Christian emperor, who gave the Pope temporal power over the Roman western world. The triumphal arch alludes to the imperial grant of papal power of the Pope. Sixtus IV was thereby not only illustrating his position in a line of succession starting in the Old Testament and continuing through the New Testament up to contemporary times, but was simultaneously restating the view of the papacy as the legitimate successor to the Roman Empire. 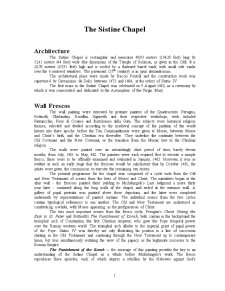 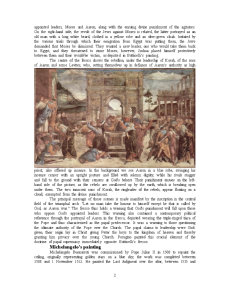 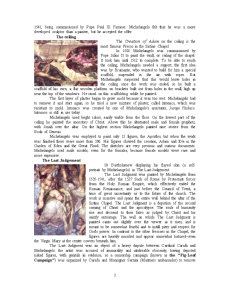 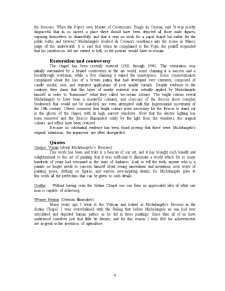 Referat
The Pearl of Love

The pearl is lovelier than the most brilliant of crystalline stones, the moralist declares, because it is made through the suffering of a living...

The novel The French Lieutenant's Woman is almost as much about the twentieth century attitude to the Victorian age as it is about its setting. The...