History of terrorist threats in Romania . . 3

Prevention and Combating Terrorism in Romania 7

Terrorism has not emerged recently. It is very old - it preceded the strategy of terror exercised by the Roman legions on the populations of the occupied areas, surviving it - and, over time, has manifested itself in all possible forms, from cave terrorism to cyberterrorism, depending on the stage of civilization which mankind has reached, therefore by the means at its disposal, and almost everywhere in the world. The means were always different, but the essence remained the same: fear, destruction, murder. Unfortunately, terrorism, like war, is in a way part of the arsenal through which the world denies itself, hates itself and destroys itself, believing that it is purifying itself. Terrorism is an asymmetric, shadowy threat. Its evolution, from a number or sum of terrorist acts to an apogee of fanaticism, cruelty and violence, to a terrorist war, also asymmetric and perverse, is likely to generate the appropriate reaction of humanity, to trigger the anti-terrorist war. Terrorism is not only the evil that pervades the planet, but it is the very evil in the world, that is, our evil, the fanatical part between us and, often, within us, the obsessive fanaticism of power, of revenge, of egocentrism, of punishment at all costs, of purification by killing and destruction. Therefore, this phenomenon is specific only to the human environment.

History of terrorist threats in Romania

At the beginning of the 19th century in Romanian political life they have a series of unexpected events took place, which defined a new phase in which Romanian life entered. These events include participation in World War I, the creation of Greater Romania and the activation of the nationalist Iron Guard movement which became a major political factor for that period which acted to exploit the fear of communism and spread resentment against alleged foreign domination. We will further present some aspects of the Romanian political life that highlight the activity of some groups whose objectives can be classified as terrorist.

1. 1920, December 8 - The 1920 attack on the Romanian Senate by the installation and detonation of an artisanal bomb placed in the hall of the Romanian Senate by an anarchist-terrorist group of far-left communist Jews. The attack was to lead to a "mass uprising" and chaos, the overthrow of the monarchy and the installation of a Bolshevik regime in Romania. The attack was staged out by Max Goldstein (leader of the group), Saul Osias and Leon Lichtblau. The explosion killed the Minister of Justice, Dimitrie Greceanu, the senators Demetriu Radu and Spirea Gheorghiu. As a result of the attack, the President of the Senate, Constantin Coandă, the Orthodox Bishop Nifon Nicolescu and the Orthodox Bishop Roman Ciorogariu were also injured.

2. 1984, December 4 - The assassination of the Vice Consul of the Jordanian Embassy Azmi Al-Mufti in Bucharest was the only situation in the national anti-terrorist history in which specialized structures did not catch the threat before it materialized. The vice-consul was shot dead by Ahmad Mohammed Ali Al-Hersh, a Jordanian of Palestinian origin studying in Romania, under the orders of the Palestinian terrorist organization Fatah, who wanted to give a warning to states he considered hostile to the Palestinian people. In 1985, the attacker was sentenced to 20 years in prison. 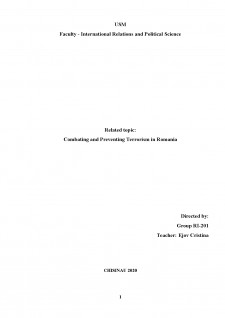 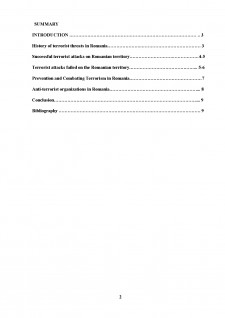 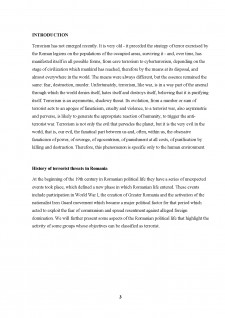 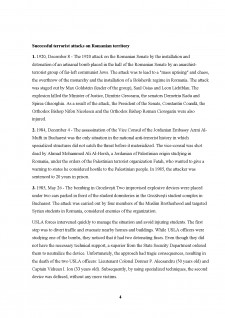 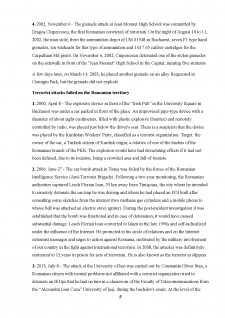 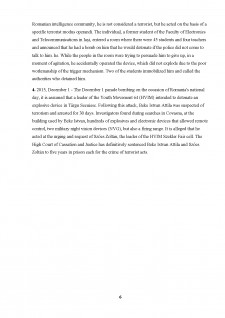 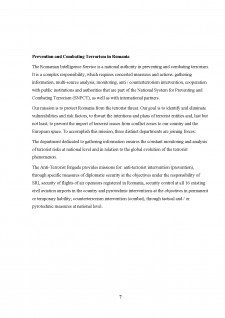 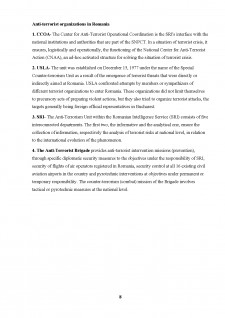 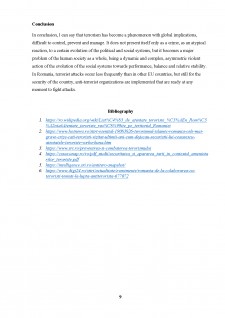