Airplanes give us the chance to save time, to travel long distances, confort and also safety. The airline industry has grown a lot in the past years and everyone chooses to travel fast and cheaply, because everybody trusts more and more air travel.

Let’s remember some historical details about aircrafts. Appearing in the early twentieth century, the first aircraft required a lot of courage and skill to fly them. In that period, they were not fast or roomy. The first controlled and propelled flight was made by the Wright Brothers on December 17, 1903, the first effective self-propelled flight was made by Traian Vuia on March 18, 1906, and the first official self-propelled flight was made by Alberto Santos-Dumont on November 12, 1906. Henri Coandă is the inventor of the propellerless aircraft, which is powered by a jet engine. Louis Blériot was the first pilot who cross the English Channel in 1909. Charles Lindbergh made the first crossing of the Atlantic, alone and non-stop, in 1927. In 1933, the Wiley Post was the first pilot who make it alone. around the world. It covered 25,000 km in 7 days, 18 hours and 49 minutes. In other words, we have put out mark on the history of aviation through Traian Vuia and Henri Coanda. This is the reason why these famous names were given to the airports in our country, like Traian Vuia in Timisoara and Henri Coanda in Bucharest.

Nowadays, aircraft are used not only for passenger transport, but also for the transport of various goods abroad. It is an alternative to land and water versions of transport, where the air involves advantages such as: high speed, number of passengers, load capacity, weight. It saves time, air traffic is fast and possible across the oceans, and adaptable to climatic conditions. Air transport has revolutionized global transport, reducing time and risks.

The purpose of aviation is the implementation of passengers, baggage and cargo for the flight tax. Air transport can be domestic (point of departure, destination, stops are located on the territory of the same state) and international (involves several states and can be both commercial and free). So, with a high speed and goods of different capacities can reach very distant destinations in a timely manner (transplantation, valuables, etc.), ensuring optimal transport conditions (temperature, humidity, etc.), and the risk of theft is 0. Their damage can only be caused during loading or during customs control. Direct flights ensure the transport to the desired quality of all food, perishable goods, etc. Air transport is also addressed to dangerous goods, which can damage the aircraft or the environment in careless loading or storage conditions during transport (explosives, flammable fluids, oxidizing substances, corrosive, poisonous, emitting radiation, etc.). Also, heavy transport aircraft can ensure the transport of oversized goods within the allowed limits (the size of the cargo hatch is dr 6.4 meters). There is charter air transport, where the number of passengers is small (up to 15 people), which serves legal entities. There is also corporate air transport involving a non-commercial base of the operator (aircraft owner).

An airport includes an airport infrastructure. The aerodrome is a complex field of engineering structures and buildings, specially dedicated and equipped for takeoff and landing, taxi, parking and aircraft services. The airport contains a complex of air transport and air transport services. Its territory is classified into the arrival and departure area, the neutral area and the waiting area.

Henri Coanda is the main air gate of Romania and one of the largest and most modern airports in Eastern Europe. It is located 16.5 kilometers north of the center of the capital, has a total area of 605 ha, two platforms and two operational terminals. It has a capacity of 6 million passengers, with a maximum rate of 2300 passengers per hour and 21800 tons of cargo per year, and allows up to 39 aircraft movements per hour. It has 38 boarding gates and 6 luggage racks. From Bucharest, the aircrafts operate regular flights in 66 international destinations (of which 60 European and 6 in Asia) and 9 destinations in Romania. Among the other airports, the Avram Iancu airport in Cluj-Napoca stands out through the passenger traffic (1 182 047 passengers transited), Traian Vuia from Timișoara (736 191 pers.), Transylvania from Târgu Mureș (343 521 pers.), George Enescu from Bacău (313 346 pers.) etc. 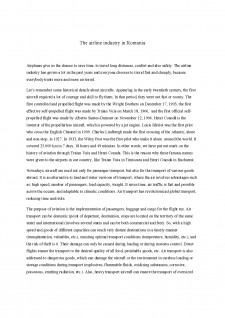 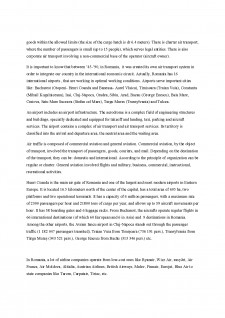 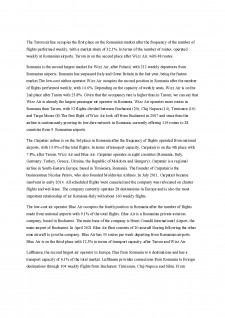 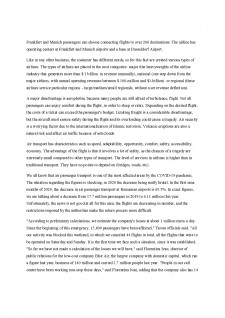 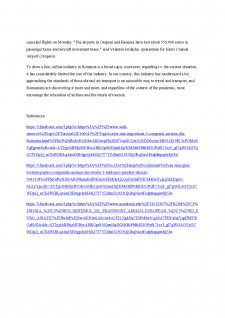