Essays on the Social Situation of Mental Patients

The author of this book , published in 1961,Erving Goffman, a well known American sociologist spends three years of his life researching about medical institutions and prisons in America, particularly in St. Elizabeth Hospital from Washington. The book is the result of different wrote sources, derived from psychiatric studies, memoirs and Goffman’s direct observation (1954-1957), in mental hospitals, army camps, and prisons, thus he experienced on him self the true life of institutionalized people.

Before I present you Goffman’s view about the social situation of mental patients, I need to mention that was really hard to choose what is worth reading and analyzing from his book, because every single explanation or example deserves our attention. The most interesting and in the same time the most shocking thing from this book is the so-called hospital policy, known by every interested person and on the other side the true practices known only by institution and their inmates. From the beginning Goffman talks about the risks of being patient in a total institution, the individual is force to bear a long series of human degradation, humiliation, mockery, exploitation which goes gradually to a self degradation, that is the patient will take over beliefs from people around him(family, employed) about his own person.

The degradation of self occurs after a series of processes, and one of this process is the forfeit of all personal objects of someone who gets inside a total institution as a patient and its substitution with other marked and standardized objects : “ this is important because person invest self feelings in their possessions.”* But the most critical process of all is the lost of one’s full name and its replacement with a number, because the complete name is one of the valuable possession of someone.

Once someone gets patient in a mental institution he understands quickly that there is a system of privileges and one of punishments, and that he has to submit to personnel otherwise will be punish. The privileges consist in a better room, a better work place, the possibility of going outside the hospital, little things like coffee, cigarettes or respect from personnel members. The punishments can be the privileges suspension, corporal or psychical punishment, isolation, shocks, unpleasant tasks etc. The patient reactions to the treatment are different at least in the beginning: “The inmate will employ different personal lines of adaptation at different phases in his moral career, and may even alternate among different tacks at the same time”**. First, there is the so-called “situational withdrawal”, where the inmate

withdraws his attention from everything around him except events immediately around his body.

Secondly, there is “intransigent line”, thus the patient intentionally challenges the institution by refusing to cooperate with stuff. A third mode of adaptation is “colonization”, when the inmate makes from institution his own home. And the fourth mode is “conversion”, here the patient acts the role of the perfect inmate.

If we look from institution’s point of view, it seem to use all those practices for patient’s good and safety : “ Many total institutions, most of the time, seem to function merely as storage dumps for inmates, but, as previously suggested, they usually present themselves to the public as rational organizations designed consciously, as effective machines…”*.A really socking truth is the fact that employers work with “objects” not human beings, so the personnel’s duty to respect some standards of human treatment is a real problem. Some caretakers from mental hospitals prefer to work in those departments with senile patients, because they don’t claim too much.

Moral patient’s career has three principal phases : prepatient, inpatient and past patient. The fact that people become prepatients is the result of their wrong interpretation regarding the symptoms, most of it derived from stress or emotional disturbance, thus they or a member of their family start to believe this is a sign he’s loosing his minds. Once they get to a medical control their family or doctors will convince him about the necessity of internment, as being the best solution. So once hospitalize the prepatient becomes a inpatient, “ he starts out with relationships and rights, and ends up, at the beginning of his hospital stay, with hardly any of either.”** .In all this time, to obtain his cooperation, the employers will discredit of any version of the patient about his own person and they’ll make sure he knows he is seek and needs their help.( I don’t refer here to really sick people) 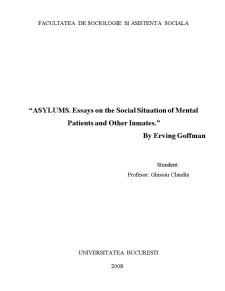 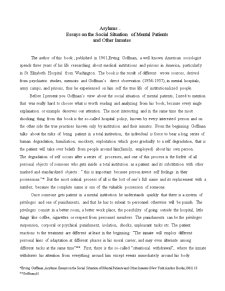 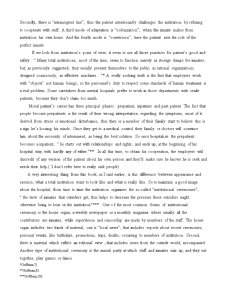 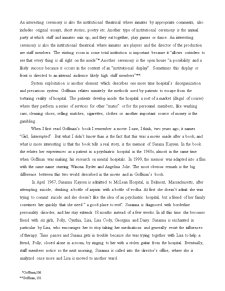 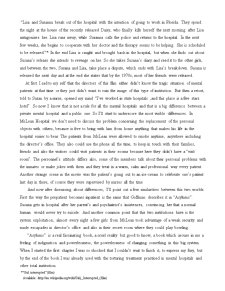 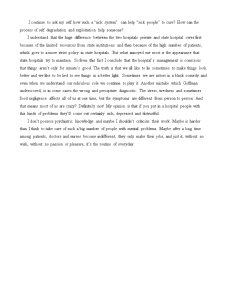 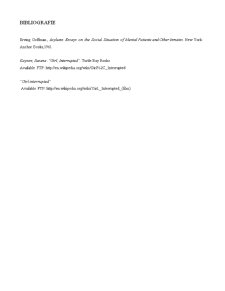