Influence of Europeanisation în the Reform of Public Sector

The literature seems to agree on two approaches of the concept “Europeanisation”. On the one hand it is considered to be only the process of adopting EU regulations into the national legislations and on the other hand, the reverse process is also considered, meaning the influence each member state could have on the design of European policies that are agreed upon. Howell (2004, p. 20) argues that Europeanisation could be seen as the process of downloading the “EU directives, regulations and institutional structures to the domestic level”. From this statement, it can be observed that he also includes “institutional structures” in the bunch of characteristics of the Europeanisation. Therefore, a first idea that Europeanisation could have an influence on the reform of the public sector is created, despite the first thoughts that come in one’s mind when the term Europeanisation is heard, namely that it refers only to directives and policies. The other conceptualisation of the notion ‘Europeanisation’ considers the way EU internalize some characteristics of the member states. Howell (2004, p.20) mentions “shared beliefs, informal and formal rules, discourse, identities and vertical and horizontal policy transfer”. To summarize, from this perspective, Europeanisation is considered to be an interactive process that involved bottom up and top-down procedures. The above presented approach is referred to as being the “narrow” approach by Flockhart (2006, p.88). She identifies also a “broad conception” namely seeing Europeanisation as “process of cultural, political and organisational change along European lines, within and beyond the borders of Europe”. She states also that the impact of this form of Europeanisation is perceived by the citizens, particularly when national governments put the blame on the “EU by presenting (mostly unpopular) policies as part of the Europeanisation process”, especially if it is considered an euro-sceptic country like Britain, where the gap between elite and mass attitude towards Europeanisation worth to be considered. The Europeanisation is also seen a situation “where certain effects can be shown to have occurred” and not a process (Massey, 2004, p. 24).

The paper presented few of the approaches regarding the meaning of ‘Europeanisation”. In the following part, we will look quickly through the approaches regarding the reform of the public administration. A first important insight is offered by Toonen, (2009), who presents a very comprehensive overview of the reform activity in public administration. He argues that many countries have “embarked upon similar type of public sector reform” (p. 301) independent of their political and administrative systems. Among the models presented are: New Public Management reform, welfare state policy reform, comprehensive reform and transformation without reform. He (2009, p. 301) points that “administrative and public sector reform involves thinking about values, norms and principles”. From the above mentioned statement, we understand that reform of the public sector does not mean only the changes occurred in the public administration, but a planned process whose implementation is guided by a set of values and norms.

In terms of reform of the public sector, this assignment will focus on the domestic institutions and their reactions to the process of Europeanisation. Relevant to this aspect is the success in the negotiations with the EU between domestic and EU level. It has been argued that the level of “success regarding uploading has determined the level of change in relation to downloading” (Howell, 2004, p.23). Massey (2004), considering the fact that nowadays all governments are planning their policies within the ‘European’ context, affirms that it is essential to see the modernisation of the public sector institutions as part of the Europeanisation’s mechanism. Thus, a direct connection between Europeanisation and reform of the public sector is to be found. Massey (2004, p. 21) observes an “increasing convergence in the policy-making and institutional decision-making structures and procedures of their public administrations” despite the different British and Continental Europe traditions. 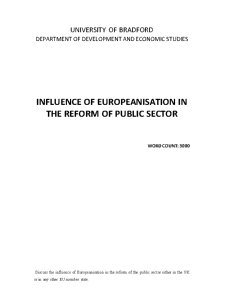 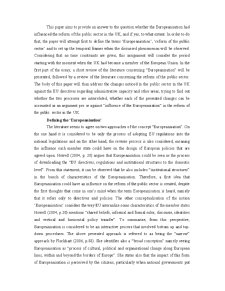 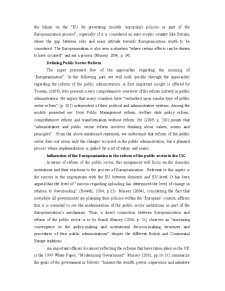 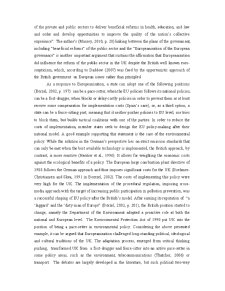 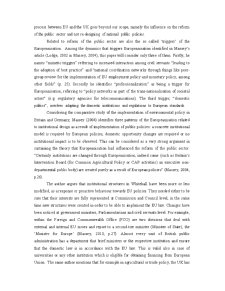 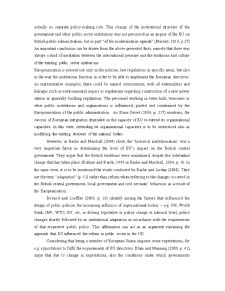 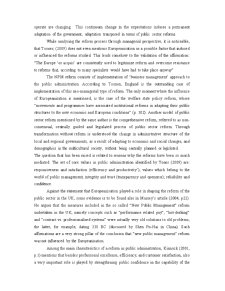 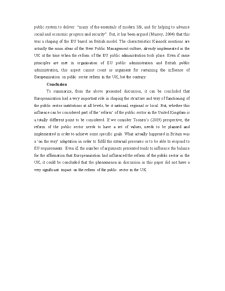 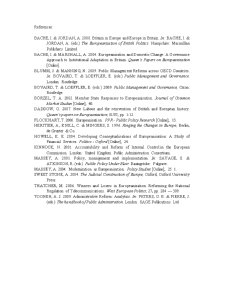