• Main characters and plot of the novel

• Analysis of major themes of the novel starting from the quotations

“ You’re a Polack, not a Yid. That gives you a privilege, a choice.”

Her thought process dwindled, ceased. Then she felt her legs crumple. “I can’t choose!” She began to scream. Oh, how she recalled her own screams! Tormented angels never screeched so loudly above hell’s pandemonium. “Ich kann nicht wählen!” she screamed.

The doctor was aware of unwanted attention. “Shut up!” he ordered. “Hurry now and choose. Choos, goddamit, or I’ll send them both over there. Quick!”

“Don’t make me choose,” she heard herself plead in a whisper, I can’t choose.”

“Send them both over there, then,” the doctor said to the aide, “nach links”.

“Mama!” She heard Eva’s thin but soaring cry at the instant that she thrust the child away from her and rose from the concrete with a clumsy stumbling motion. “Take the baby!” she called out. “Take my little girl!”

“She still had her mis – and her flute, “ Sophie said as she finished talking to me. “All these years I have never been able to bear those words. Or bear to speak them, in any language.”

HAVING THE PRIVILEGE TO CHOOSE

Published in 1979, Sophie’s Choice by William Styron, a novel wich explores evil in many forms through the life of a Polish young woman befor, during and after the World War II, became an immediate bestseller and the basis of a succesfull film. Winner of the National Book Award in 1980, Sophie’s Choice is often considered Styron’s best work.

The narrator, Stingo, a young Southern writer, moves into a Brooklyn boarding house, where he meets his upstairs neighbour, Sophie Zawistowska, a Polish survivor of the Nazi concentration camp, and her lover, Nathan Landau, an American Jew with sever mental problems. Stingo becames Sophie’s confidant, who eventually relates him all the atrocities she had to endure during the war, especially when she was a prisoner in Auschwitz. Reading the book we find out that Sophie had to make many difficult choices durind her stay in Auschwitz. This novel explores evil in many forms: racism, sexism, substance abuse, domestic violence, and wartime atrocities. It suggests that oppression is a source of evil – that the state of complete domination achieved by the Third Reich evolved from the institution of slavery. It illustrates how people try to save themselves from the widening vortex of hatred. For exemple, Sophie thinks she is safe as long as the Germans focus on destroying the Jews.

Sophie speaks perfect German and French, being tought by her father, who was a professor at the local university. As a young woman she works as her fathers secretary and marries his protege, Kazik Zawistowska. They have two children, a son, Jan, and a doughter, Eva. Sophie witnesses the arrest of her father and her husband, who are later killed in Sachsenhausen. She mover with her two children in Warsaw, soon she is discovered to have illegally hidden meat under her dress; she hoped to deliver the meat to her sick mother. She is transported with her children to the concentration camp at Auschwitz. On arrival, on the Auschwitz platform, standing before the Nazi doctor, who played God, by decideing who should work and who should die, Sophie makes the mistake of catching the doctors attention. This is the moment when the sadic Nazi doctor makes her take the most horrible decision of her life.

Being a Polack she has a “privilege”, she has to choose which one of her two children should live and which one should be sent to the gas chamber than the incinerator to die. She refuses to make a decision until the officer threatens to take away both of her children. In that desperate moment, she chooses her son instead of her daughter. There was no other posibility, she had to choose one, or they both would have been killed. The horror of such a choice would drive any parent to the brink of insanity – and perhaps beyond. 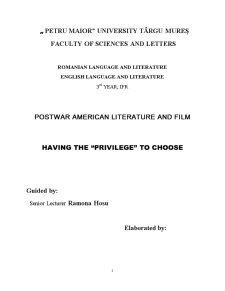 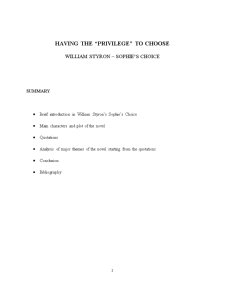 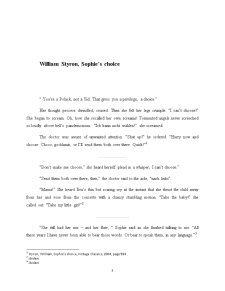 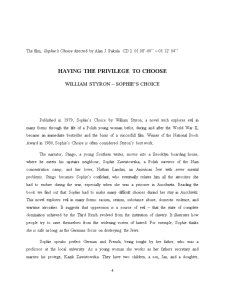 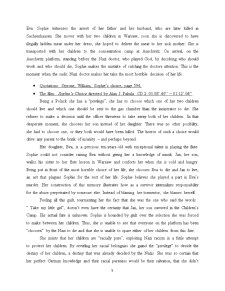 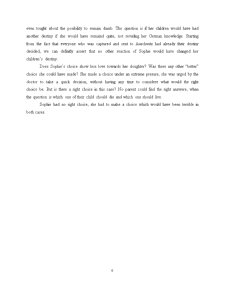 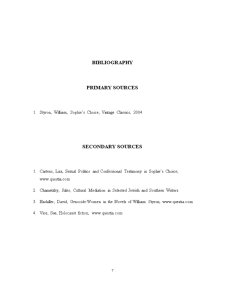